March 11, 2009
This is something that you probably won't get to see everyday. After finishing my Body Attack class at Les Mills, i head down to the circuit room and guess who i saw working out? 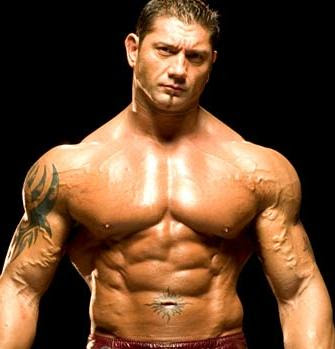 Dave Batista
I couldn't believe my eyes. Other guys who knew who he is just stood there watching him do his thing and kept on smiling at him (which was also funny...seeing a bunch of huge size men just standing and smiling at one person working out). I managed to find that inner WWE fanatic in me to walk up to him and just shake his hands although i could have asked for a signature but i think it's just weird for a guy in a gym to be walking around with a pen and paper.

But yes, i did shake his hand and talked to him for a few seconds. It was quite awkward to be honest cause the only thing i blurted out was "HEY!! I DON'T REALLY WANNA BOTHER YOU BUT I JUST WANNA SHAKE YOUR HAND CAUSE I'VE BEEN A HUGEEE FAN OF WWE SINCE I WAS LITTLE!!" and gave him a really big weird looking smile. Then i did a bit of Brunei tourism telling him where i'm from and surprise surprise he said he knows where Brunei is. I was quite close to telling him that i'm actually more of a Undertaker fan but was scared that he'd spear me on the spot. :P For those who's wondering why he's all the way down here in Auckland, he's actually here to do a bit of promotion for WWE Raw! that's gonna be heading down here for a show on July 3rd. I REALLY REALLY want to go since it's going to be my semester break by then...y'know just to get the feel of how's it's like to watch it live. Hehe.

Oh a physical note, he wasn't as tall as i thought he'd be but man, he's got ridiculously huge biceps. Like really huge! It's like the size of my thighs...no kidding!

And for a wrestler, he's got a rather smooth hand too. Hahaha!