Showing posts from August, 2006
Show all

What the world needs... 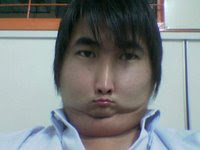 I guess that's how Ronald Cheng Lim would look like. That's Basira's new hot boyfriend from Germany :) Anyway, sorry for the lack of updates. Lately there's been so much stuff going on in my head and it doesn't seem like it's gonna be good. But still, no matter how bad my life turns, i won't find any reason to do what my friend chose to do. I won't ellaborate on the whole story as i myself have no idea what's really going on but i'd just like to say, as a friend, i'm really disappointed at the decision he made.. Man attempts suicide at shopping mall By Azlan Othman A 20-year-old cook, allegedly suffering from mental depression, attempted to kill himself at a shopping mall in the capital recently, the second such incident reported in recent weeks. The man, who hails from Sungai Tilong, allegedly tried to commit suicide by trying to inflict injuries with a knife. The police, who received the distress call at around 8.42pm, said cuts and
2 comments
Read more
More posts