Showing posts from May, 2006
Show all

May 28, 2006
TelBru regrets confusion at counter We refer to Kangta164 (BB issue, 24th May 2006 entitled "E-Speed Blues Continue") regarding his displeasure of the services provided by our counter staff when he applied for a migration of his e-Speed1 service to e-Speed2 during our new subscriptions for e-Speed2 promotion. We sincerely apologise to him for the confusion and inconvenience caused due to the misleading information given by our counter staff. We would like to thank him for bringing this matter into our attention. To ensure that such incidents do not recur in the future, we will further enhance the sharing of information on our products and services within the organisation especially to our counter staffs. We are too happy to accommodate the writer's requirement and invite him to approach us directly. We would also like to take this opportunity to inform our valued e-Speed1 customers that TelBru is currently implementing a phased migration of e-Speed1 to e-Speed2 as pa
3 comments
Read more

May 24, 2006
After refraining myself from writing in to Borneo Bulletin for several times, i couldn't help it anymore after one particular incident that happened to me regarding Espeed. So here i was, sitting down at my office trying not to write down a book on how i really feel towards the nation's broadband provider. Despite my 'first time' (sounds odd doesn't it?) writing in to Borneo Bulletin , it manage to get through probably hundreds of letters each day and get published on today's paper. E-Speed Blues Continue... WITH TelBru's new slogan, it sounded really promising that soon there would be a difference. Aside from the refurnishing of the new building that makes a big difference, much to my disappointment, the services are still the same. Recently, there was a promotion on the Espeed 2. After getting news from my friend that all Espeed 1 users will need to upgrade to Espeed 2, i decided to visit the news TelBru headquarters to get more information. The
Post a Comment
Read more 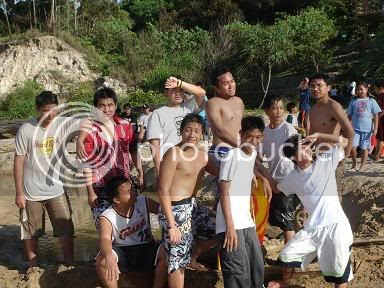 Within a few hours after Flight Salvation 777 crashed into an unknown island, the group of survivors decided not to wait any longer. After having their afternoon lunch of barbequed chickens, squids, fried mee-hoon, ice cream and many delicious foods, the survivors decided it's time... Well, not to build a raft and sail off to look for help but rather....to build a dam! (Yeap! that's how the story goes...) After discovering "fresh" water flowing out from the beach, the survivors decide it's wise for them to build a dam to preserve their only source of water they had in order to survive. They searched high and low, and manage to find a number of logs. And so, the journey begins.... After gathering a group of men willing to help out on building their dam, the team of survivors worked continuously for almost 30 minutes using only the sand around them and logs that they can find laying around. Survivor #1 : "What if the 'others' come and kick us ou
1 comment
Read more

May 04, 2006
He was borned in Hong Kong back in 1950. It wasn't a rich family but his parents managed to send him to Scotland to pursue his studies in Accounting. Sad to say, his family never had the money to finance him while he was in Scotland. All the money they had was just enough to pay for his college fees. The rest was up to him. From there, he learned about life the hard way. While studying, he had to get a part time job as his own allowance. For food, he had to save as much as he can. Coming from a Chinese family, he knew what he could eat and what others (the foreigners) usually don't. What he usually did was, he went around restaurants and asked the kitchen staffs for food. Not fully cooked food nor left overs but rather "spareparts" of pigs and chickens such as intestines, liver, tongue, feet, etc. Back then, foreigners don't really know what to do with these parts of the animals and most of it were given to him. From there, he brought these home and made his own
2 comments
Read more
More posts