Showing posts from November, 2007
Show all

I hate being sick Came down with a fever, flu, sorethroat and a bad migraine today. Didn't really do much aside from sleeping the day away. Managed to catch the Nativity Play at St Andrew's School yesterday. It was well played by the students, ex-students and teachers of St Andrew's School. *applause* There were a few bloopers here and there during showtime but nevertheless, the audience enjoyed it a lot. In Him
Post a Comment
Read more

I also have class...

November 20, 2007
Okay, i haven't quite gotten over the fact that "some" bank uses really catchy motto and phrases. By far the worst one would be; "Every single day we provide world class services to you..." Guess what? I accidentally made a bank teller from a local bank that uses the above mentioned motto muttered "F$#K!" under her breath right in front of me. Now THAT'S world class service for you right there babeh! Wanna give it a try? Here's how... Tip: Do it when you have different cheques to bank in to the same account. Preferably 4 or 5, fill them up accordingly in their deposit slips. Here's the trick part. Arrange them accordingly to the cheque numbers written on the deposit slips but mess 2 cheques up and put them say around the middle. Queue for an approximate 30 minutes and tadaa~ Let's see what other world class services they have to offer next. In Him
Post a Comment
Read more

Meet Anna Holtby . She's got one of the most mesmerizing blue eyes i've ever seen. Alvin say she's too young to go on Facebook but he didn't say anything 'bout Flickr ! They say babies naturally cling on to everything. As they grow older, they'll slowly learn to let go. Yeap, i'm still having so much fun with my new toy. :) In Him
Post a Comment
Read more

Managed to get a new toy last week many thanks to Dex for helping out. Still quite new at using it so don't expect me to post too much pictures yet but for now, here are 2 pictures that i'm quite happy with. Ben during lunch time... Ray during supper time.... Would you like to be my next model? :P On a lighter note, a ridiculous news for Santas wannabe in Australia. SYDNEY (AFP) - Santas in Australia's largest city have been told not to use Father Christmas's traditional "ho ho ho" greeting because it may be offensive to women, it was reported Thursday. Sydney's Santa Clauses have instead been instructed to say "ha ha ha" instead, the Daily Telegraph reported. One disgruntled Santa told the newspaper a recruitment firm warned him not to use "ho ho ho" because it could frighten children and was too close to "ho", a US slang term for prostitute. "Gimme a break," said Julie Gale, who runs the campaign
Post a Comment
Read more

One thing i miss having around in Brunei is a good concert despite having the oppurtunity to attend only 3 concerts in Brunei i.e. Michael Jackson's History Tour Concert , Westlife's World Tour and A1's Concert . The one that stood out for me then, would definitely be Westlife's concert cause back then, they were pretty much at the top of the music industry not long after their debut. Plus, it was my first concert that my dad gave me money and approval to go attend the concert. As far as i know, here are a list of international artists that have ever peformed in Brunei. - Michael Jackson - Whitney Houston - Seal - Stevie Wonder - Westlife - The Moffatts - A1 - Blue Ever since after 2002 or so, there hasn't been much great large scales international concerts going on. It's always been either some Indonesian rock groups / artists or some Akademi Fantasia people. This is pretty much a random rant from me because i was browsing around Brunei Times few days ago a
4 comments
Read more

I remember some few posts back, I did mention about how dull and predictable horror movies are getting especially if it’s a new one. What more with this type of genre, both the trailer and the poster can easily deceive you into watching what you once thought could be a cool movie into a boring movie. Lately, it seem like directors tend to focus more on how to make trailers and posters much more appealing to cheat the audiences into watching a movie rather than to make a good movie for viewers to enjoy. As I was saying about how dull and predictable horror movies can get, I got the same sort of expectation when director David Slade released "30 Days of Night" . The only thing that stood out for this one was how the vampires were being portrayed in the movie. For the past few vampire-ish movies I’ve watched, somehow they (the vampires) either seemed too fake or just plain weird. But the ones in this movie just got my attention when i saw the poster and the trailer thanks to t
Post a Comment
Read more

I'm beginning to get scared of the whole banking system in Brunei. It's like no matter whose shoes you're in, you're bound to be in a losing situation. For example, if you're a bank teller and there's a long queue in front of you, you'll feel pressured while working (at least that's how i'll feel if i'm really working as a bank teller but judging from the pace of Brunei's bank tellers, i don't think they sense any pressure at all even if the queue is from Temburong all the way to Kuala Belait!) what more if in that queue there are some bank customers who act like as if they own the bank despite having a mere $50.00 in their bank account. You know there's definitely gonna be a drama bigger than the Titanic once those type of customers reach your counter. However, if you're a normal bank customer queuing in that long stretch of line, you'll also feel equally annoyed looking at the "efficiency" of the bank tellers an
Post a Comment
Read more

I remember coming across my first lomo camera back in 2001 or so when i had my first trip to Kuala Lumpur with my family. I was quite close to getting it when i decided not to. Now i kinda regret. But thanks to Google, i found a cheaper way to make my own lomo picture without the camera. Ahh, the power of photoshop. Haha. My first attempt at making a picture looking lomo-ish. Yes, i'm quite a noob when it comes to photoshop. Before editting. My first attempt at making it look lomo. I think it looks pretty decent although it wasn't the result that i expected. Maybe it's not really that lomo after all. Hmm...anyway, few more before and after pictures for your entertainment. Picture taken last year or so. Pretty artsy shot taken by Nick using my T3 Cybershot camera. I think it's the same beach we went to for this year's outing too. Ray and Kit For this i tried giving it more of a 'fisheye' finish... That's about all. I could always save all the hassl
2 comments
Read more 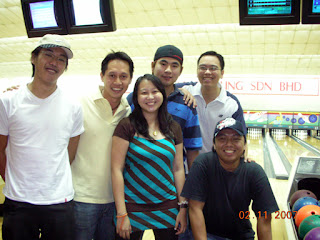 Just a short 'continuation' on my previous bowling post. Just now, SAC held a CG bowling competition at Utama Bowling. Decided to join my CG team for the competition and surprisingly, for a bunch of noobs in this game, i wouldn't say we bowled badly. Meet the "20 something" bowlers... Well, we didn't exactly win anything although i really did think our cheers were somewhat louder than the rest. After all, we do have Stephen on the team what? Haha. Kidding bro! Had a great game, great fun and great competition definitely. " TWENTY SOMETHING!! *claps* *claps* *claps* *claps* " Last but not least, another good reason why Ron wouldn't make it to the pros for this sport. I could've swore that ball was gonna take down all the remaining pins. Ended up with hitting that one pin only. -_-" In Him
Post a Comment
Read more

One for the album 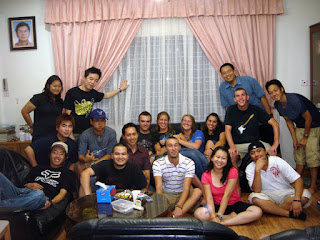 "20 something and YWAM-ers " Not everyday you'll get Americans and South Koreans coming in to your place and have a great time playing Guesstures , Pictionary Mania , Guitar Hero III and a failed attempt at Scene-It? ( I seriously think i should sell that game off on Ebay soon!) . Great bunch of people from YWAM . Catch them at YDM this coming Saturday. In Him
Post a Comment
Read more
More posts