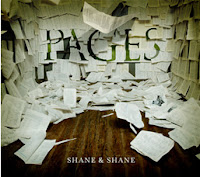 Have i mentioned that aside from Korean music, or specifically Kang Ta's music, i'm also a big big fan of Christian duo Shane & Shane?

After a long period of waiting for their new album (which i got bored of checking their website repeatedly, and in the end, Joel was the one who told me about the scheduled release of their new album...) they have finally came up with their brand new album entitled Pages. I'm sure this bugger will definitely get his hands on the album first 'cause before he left, he's already 'pushing my buttons' about it. But that's YOUR advantage being in the States. As for my advantage of staying in good old Brunei? Uhh...i can get my hands on Zul-F's album here first...? Right....hahaha!

But anway, this is the best part about getting the new Shane & Shane's album...

I just hope this time, the cds won't make another de-tour trip back here. Perhaps i should take advantage of Brunei's celebrity to help me out. What say you buddy? :P

Gonna share something inspiring with you guys that happened to me today. You see, I've been missing my dad a lot lately. It just somehow randomly occured to me how much i've regretted not spending much time with him back then even though his life was hanging by a thread. I'll never forgive myself for the times i've actually told myself that "..there's always tomorow to see him" each time my mom asked me to visit him in the hopsital. And the worst part was, i regretted not telling him at all how much i loved him.

But today (*yes today*), God reminded and revealed to me that He works in mysterious ways. We had Pastor Derek Hong from Church of our Saviour, Singapore who came in and gave a talk. Honestly, my mind drifting in and out of the sermon until he came to the part about adoptions. Then, the topic just somehow went on about parents and the next thing i know, he ended up asking us to think about our earthly father regardless of whether they're still around or not and just asking the Lord for forgiveness in their lives. He also added that it could possibly be the whole "Asian" cultures on how fathers have never told their children that they love them and urged fathers to tell that to their children. But that's not all. The most beautiful part of tonight's session was, he somehow ended with a song from "Sunday School" which just so happened to be my father's favourite song too prior to his death and Pastor Derek asked us to change the lyrics of the songs...

I broke down in tears. Call it coincidence, call it luck. I say this is God working mysteriously in one's life! :)

I have an ooo-some God.


In Him
dad God music