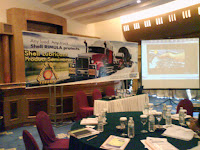 Attended Brunei Shell Marketing's Seminar on lubricants today at The Empire Hotel & Country Club. Initially, i did not want to attend such function because most of the time, it'd be bosses or at least head of companies attending such events thus, i'd definitely feel out of place. But after giving much thoughts on the positive side of attending this and since my boss did directly ask me to represent my company, i've got no better options but to attend. Plus, this was my first official seminar alone and representing my company. *pats myself* I've skipped many a lot of company dinner invitations and government ceremonies due to the fact that i still don't think i'm ready to face the business side of the world as 'Andrew's son'.

I arrived on time surprisingly and as predicted, everyone knew everyone and I was pretty much deserted. While on my way to Empire this morning, i was 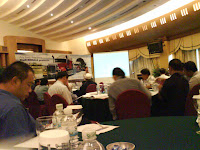 actually picturing the seating arrangement of the seminar to be the usual theatre-ish way so my hopes was pretty much high that i could be able to sit at the back of the room where i can sneak in and out easily but much to my disappointment, it's in a table to table way. And like it or not, you're sitting with a bunch of businessmen and company representatives whom you've never seen before but heard of their companies / names everywhere. Talk about peer pressure when they asked you which company are you from. -_-"

The seminar started off quite well with an introduction by BSM's staffs and the programme for the day. Then we were also informed that they have specially arranged 2 Shell representatives from overseas to educate us on Shell lubricants. Quite grand eh? The first guy to talk to us was from Shell Singapore and his presentation took up almost 1 1/2 hour. Informative, on the spot and well presented. Everyone was interested (not me though cause i don't really know much about my machineries and the oils being used haha!) until they introduced the second speaker which was from Shell China.

The word "China" just echoed in my head when it was being mentioned. Beijing-China to be specific. Okay, first thing first, I'm not being racist/country-ist/China-ist whatsoever but when they mentioned "Next up we'll have Chris from Shell China to brief you on the uses of blah blah blah..", a footage of Russell Peters just started rolling in my mind.

I couldn't help but smile when i thought about bits and pieces of that clip and i won't be surprise if the girl who was sitting next to me today just so happen to think that i'm a pervert cause she might have probably caught me smiling just as the word 'lubricants' was being mentioned. But anyway, i tried shrugging it off thinking to myself that it couldn't be that bad since Shell is afterall a global company, therefore the person who have such privilege to be flown over for a seminar talk should have at least understandable English right?


One minute of what i've went through the whole day!

Guess i was wrong. Maybe out of the whole of Shell China, only Mr. Chris here just so happen to have proper training of not repeating "Niiigaaaa, niggaaaa, niggaa..." too much! Oh and by the way, just so you know, after lunch, half the room was already empty. Shows how 'informative' a seminar can get.

In Him
funny work