November 04, 2007
I remember coming across my first lomo camera back in 2001 or so when i had my first trip to Kuala Lumpur with my family. I was quite close to getting it when i decided not to. Now i kinda regret. But thanks to Google, i found a cheaper way to make my own lomo picture without the camera. Ahh, the power of photoshop. Haha. My first attempt at making a picture looking lomo-ish. Yes, i'm quite a noob when it comes to photoshop.

My first attempt at making it look lomo.
I think it looks pretty decent although it wasn't the result that i expected. Maybe it's not really that lomo after all. Hmm...anyway, few more before and after pictures for your entertainment. 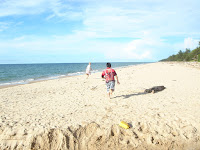 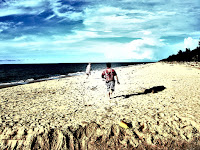 Picture taken last year or so. Pretty artsy shot taken by Nick using my T3 Cybershot camera. I think it's the same beach we went to for this year's outing too.

For this i tried giving it more of a 'fisheye' finish...
That's about all. I could always save all the hassle of editting the pictures here and there by buying an actual lomo camera but then again, that'll just be...pointless. I mean, seriously where's the fun in that right? Or maybe i should? Haha.

In Him
friends pictures

kangta164 said…
You were the one holding on to my camera then dude...haha. And you were the only one 'qualified' to take such shots. :P
12:08 AM