November 08, 2008
Past week have been filled with the word elections, Obama, McCain and more Obamas. Even this week's episode of South Park was about the Obama and McCain elections...of course with a weird storyline. Ah, let's see how long this whole Obama "Yes, we can!" phenomena is gonna last. Speaking of Obama, there was this news i heard about Kenyans naming their kids after him and his wife when he won the election. The most dodgy bit is there's one woman who gave birth to both a boy and a girl and naming both of them "Obama" and "Michelle".

On the side note here, I'm sooooo looking forward to Christmas this year. It's going to be my first Christmas with my family and relatives in Hong Kong which i haven't seen for more than 10 years. Ah, excited excited! 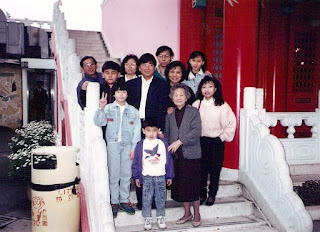 With my family back in Hong Kong then...
I can't really remember much about my childhood there other than this little round cake thingy that they sell by the side of the street. My aunt remembers clearly though that whenever we go shopping back then, i will always without fail make her stop and buy me a pack of that cake and munch on it...she says it's the "Bou bou peng" which is still around today.

Ah, i'm totally blank on what to update really. But i'll just leave you guys with an important lesson that i've learnt recently...

Never ever attempt to catch a spider in your car when you're waiting for the traffic to move. Just ignore it. Yes, just put aside the thoughts of having some cobwebs in your car for that short moment and concentrate on the car in front of you.

In Him
family random