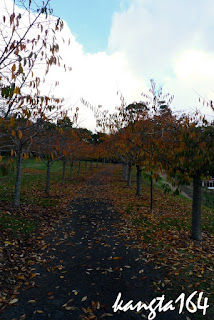 It's close to winter here and of course it's getting colder by the day. I'm not quite used to having this whole free air conditioning system everywhere yet although back home, i am quite notorious to be staying in a room that's like a freezer. I do turn it off whenever i feel cold though but in this case, let's just say the remote is no where to be found.

So, after my shocking discovery of finding out the existence of a towel dryer, i also discovered that there is actually one proper heater in the living room. Hip hip hooray? No, not really. You see my friends, life would be so much easier if things always go your way. That's the sad part of being a student and having to share an apartment. Things just don't go your way most of the time.

Being in this cold chilly weather, i see most of my neighbors' apartments windows are sealed tight, assuming that they're all kept warm with their handy dandy heater. And that would of course be an awesome feeling to come home to especially when you've spent the whole day at the uni or walking around in the cold. What i would usually do before i leave for uni is to shut the windows, turn on the heater and hope by the time i come home, it'll be all warm and cozy. By the time I come home, i've always had this little expectation in me that i'll be greeted with a nice cozy warm feeling.

But noooo, some smarty pants thinks it's cool to have the windows open this this time of the month. After attempting this move several times, i got frustrated for several reasons. First is mainly cause i just wanna have a warm room and second, the person who keeps opening the windows probably thinks he can heat up the whole of Auckland with our heater as he does not bother turning off the heater either. So one night, i purposely sat down right in the living room, closed all windows, turn on the heater and waited...

Whaddya know? It's Mr what-type-of-sausages-do-you-eat! He walks out of his room, gets his little chores done in the kitchen and suddenly just head towards the windows and open the latch. This time feeling extremely annoyed i just asked him in my most annoyingly polite tone the following question;

"Uh, dude it's freezing cold. Are you the one that's always opening the windows when i close it?"

His face suddenly turned into a frown as though as he has found his culprit too.

"So you're the one that's always closing the windows?"

By now you can pretty much say we're having our first little confrontation as housemates. So i told him i was the one responsible for closing all the windows just because i wanted the room to be warm for everyone. I thought to myself at least he better come up with logical reasons to really impress me like "Oh, cause it's bloody hot in India so i'm trying to enjoy this weather before i go back" or "Do you know how hairy I am?" but instead he told me this;

"No, you don't understand. When you close the windows, there is no air circulation in the apartment. You can die of suffocation in your sleep without knowing. You need to open the windows for air circulation!"

And then, he just walks back into his room.

Chel said…
Time to UP your game and irritate him til he moves or find another option for yourself??
1:33 PM

Stephen Chin said…
Cool... I do agree and understand with the guy though. Hahaha... cos I was the culprit in South Africa who opened the window in the dorms for air circulation during winter... Gotta BREATHE!! :) At least some are circulation :)
4:08 PM

Chel: Nah i gotta be gracious and try to deal with it cause he's moving out soon. He's almost done with his course...i just hope the next person who moves in isn't going to be as bad as him. Otherwise i'll just move to another unit. Kekeke.

Stephen: Yeah but over here i don't feel any suffocated when it's cold. Then again the whole part that annoyed me was that he's in his room like 99% of the time instead.
4:15 PM