September 25, 2008
I just find this pretty...weird. Weird in a sense that someone would actually build up a hype in finding out 'what that place is going to be' and thus, calling it..."THE EGG".

But being brought up in a country that lacks a lot of entertainment, i don't think we've got much to do either other than wait for that certain day of the month for THE pay, queue for the next 2 hours at ATMs / banks then flock all available shopping malls (only The Mall and Hua Ho malls to be precise) and chill for the next 20 plus working days waiting for the next pay to come out again. So yes, i'm not surprise that there are people actually going around, allowing their imagination to run sooo wild that they've decided to build up hypes (to the extend of alien talks and hairs!?) i'm sure by the end of the day, once whatever is up and done, when those ugly big white planks covering that section of our "prestigious" mall comes down, the forecast of reactions would be as follow;

But you can't deny that their strategy of promoting whatever that's behind those walls are brilliant. I am curious. Curious to know whether "The Egg" when open, will be able to live up to their advertisement of 'something big is about to happen' and 'A revolutionary shopping experience coming soon!' . The only big thing that i know usually takes over this place by storm is by giving out freebies. As for shopping exeprience, all i can say is as long as they do not provide decent customer services, you can forget about whatever revolutionary shopping experience.

Hmm...who knows the person behind "The Egg" is the first entreprenuer to successfully franchise a "House of Condom" in Brunei. 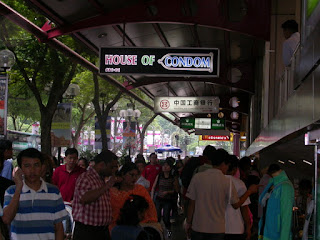 That, my friend will definitely be something big.