This is what drivers around the world, well at least in most part of the world are using at the moment to get around places in their country.I think they call those a 'Car GPS' system or something like that. It'll point you out the direction of how to get to your destination, how far you're away from it, the routes available for you to take and so on. I would say it's pretty handy-dandy for drivers. If not mistaken, some of them even have personal names where they'll greet you the very moment you turn them on (no pun intended), talk to you in their super hot technology voice and tell you which route to take and all those nonsense la.

It's about time we, too follow the footsteps of these technology cultures going on around the world so we won't get too 'ketinggalan zaman' with other countries. 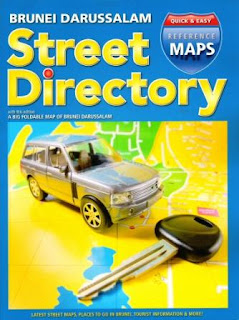 Oh yea. Unlike other countries that's selling their version for like hundreds of dollars, ours is only available at BND $14.90! So the next time if you're lost cause you got confuse between Jalan Muara and Muara or Jalan Berakas and Berakas, all you need to do just flip around the pages and keep looking for 30 minutes or so and if you're lucky, you will be able to find the route to your destination on the map!

Just keep in mind that if place / area was just recently build....the results may vary. Lol...i can't imagine the stress of flipping around the pages trying to look for the right simpangs.

And then soon...there's going to be a "Made in Brunei" mobile phones. That i seriously can't wait!