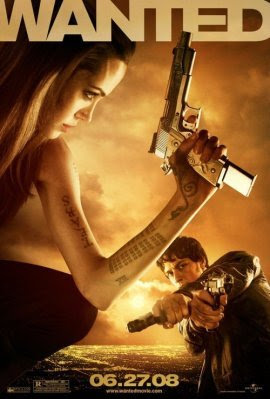 Whoa!!
That's how i felt when the movie ended. It didn't really start out so interesting but thanks to the hillarious character of Wesley Gibson (well played by James McAvoy), the scenes weren't too bad to begin with. Things definitely spiced up a bit once Angelina Jolie's face showed up on the screen 'cause that's when the action begins. No, literally....! Haha.

But yes, i sort of yelled out "Rubbish!" in the first part of the movie when they showed a scene where the bullet actually making a corner turn when it was being fired. Logically, i don't think that's a possible move but as the story goes along, you would probably have to deal with how it's being done...otherwise you might just think the whole movie is pretty stupid. I'm not the type who would watch a movie when i know that potentially, certain things can't be done in real life but for Wanted, putting aside all the illogical super effects and car flippings, i thought the storyline of the whole movie was just brilliant. I totally enjoyed certain sarcastic scenes and funny moments in this movie too.

However, i wouldn't recommend this movie to minors or people who have issues with swearing (Mind you, there are a whole lot of f$#@%# words being mentioned in this movie...you'd be surprise to find out who actually did swear in this movie towards the end too!) and also those who can't stand bloody scenes. If you're the type who gets a kick out of movies filled with great effects, this will definitely be one movie you wouldn't want to miss. As for me, i wouldn't want to watch this the second time since i'm not really a big fan of illogical effects.

Wanted, thumb up from me. Next on my MUST WATCH list...George A. Romero's "Diary of the Dead"!