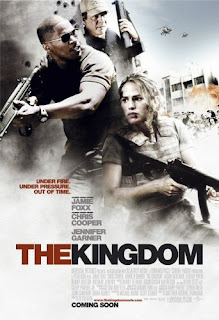 I've been trying to squeeze in as much time as i possibly could to watch as many movies after getting a new television set. For some reason, even bad movies seemed pretty decent when you watch it on a television set like the Sony Bravia. Haha. Last weekend i bought some movies from the "Orange Shop" in The Mall and out of what i've watched so far, the one that i enjoyed the most was Jamie Foxx's "The Kingdom". I can't remember if it was shown in the cinema earlier on but if you guys haven't watch this movie and you happen to enjoy action movies a lot, you wouldn't want to miss out on this one. The storyline of this movie is pretty much like what you see on the news with what's going on around the middle east today with all the war on terrorism and stuff like that, which is by the way, a bonus for you too if you have a liking for terrorism related issues. Probably more for guys la this movie. Not that i'm saying girls won't but hey, if you wanna be a tough chick, go watch this movie and learn from Jennifer Garner. She freakin' stick a knife into one of the terrorist's head!

Actually my brother was the one who introduced this movie to me. I'll only watch the movie if he gives the following type of rating;

Nick Thien said…
It was out in Brunei... but then when I asked no one wanted to go...

Anyways, the first part where the terrorist steals the car and kills the people in town and then blows everything up is bloody... but the end probably wasn't... suspenseful though.
11:13 PM

kangta164 said…
Then probably i didn't catch the trailer or i didn't know about the movie..haha. I actually find that part very disturbing especially the self bombing part. To think that that whole self bombing thing really happens in reality..kinda creeps me out.