It's been a year. A long dreadful year. So much have happened while you were away. It's been hard trying to adjust certain things on our own way when back then, it's always been your so called "system" around the house. Ah, the house sure has been more quiet-er without you around yelling our names and scolding us. It's still pretty much the same since you left cause that's how the way you like it...how it feels home to all of us. Mummy's been really tired. Certain things where you usually handled now falls on her shoulders. We know she misses you a whole lot even though she only pops out your name every once in a while but we can tell she misses you so much just by the look on her face. She's been keeping herself busy with many activities for a year now. Sometimes we don't know if that's how she likes it or she just don't want to sit around the house on her own for too long knowing she'll eventually starts thinking of you again. 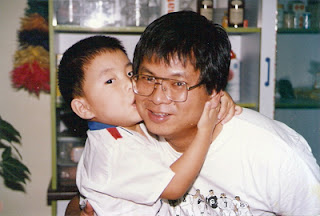 still around. At least i could confirm some stuffs with you whether i'm doing certain things the right way or not but lately it's just doing things thinking and assuming you'd do it that way. The staffs and workers are all still pretty much the same. Still the same bunch of people you worked with for the past 20 years. Foreman Lai has been helping me a lot just like how you predicted. He never fails to speak fondly about you whenever we go out for a drink. We would usually have a drink or two at restaurants where you used to bring him back then to discuss about work issues. Sometimes he would just share stories about how things were like when you both worked together till you could see tears in his eyes. He misses you a lot too pa.

Ko's not feeling well too, pa. He has finally quit smoking though after learning things the hard way. We never expected things to turn out this bad for him. Sucks really. I wonder what would you say to him if you're still around. Would you nag him as usual or would you comfort him this time? But one thing would be for sure. You'd be around to find what's best for him. 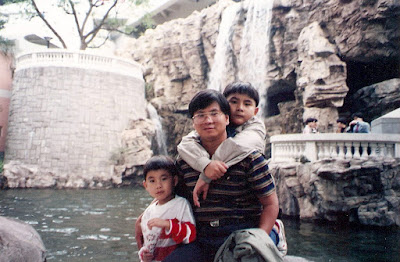 Life's been really hard these days for all of us without you around. We knew it was going to be hard but just didn't know it's going to be this hard. I guess i'm the only one who's close enough to know how stressful being in your shoes would be like by doing my best to fill in the gaps you left...except for me, i choose to give up on certain things where i know you'd spend a whole lot time doing. Well actually it's only one thing...and that's golf. Until today i still don't know why you were so obsessed with whacking that ball around 18 holes. But still, as much as i dread that sport, i'd still give up anything just to play one last hole with you. Remember when you first heard you got that dreadful sickness and finally admitted to giving up golf "forever" only to secretly sneak out behind mummy's back after a few weeks to play a few holes with me? I thought that was quite funny. The clubs are starting to rust a bit cause no one else touches them no more.

Ah, I'm turning 21 soon. I guess we won't be seeing you around again this

year. All of us are growing up pretty fast. It's just slightly different or if i may say, a little bit tougher comparing to our friends without a father figure to look up to. For me, I just have to go through the hassle of looking around and picking out bits and pieces off other daddys and pretend like i learnt some qualities from you..or at least that's what i'd think that's what you would want me to learn. It's pretty silly i know but that's the only way i could think of.

You know, you've been nothing but strong for this past year, and I've always admired how you've soldiered through life and its trials after losing your dad.

I'm sure you dad would be so proud of how've you grown up so much in a year.

You are an amazing person with a HUGE heart and I'm blessed to have you as a friend. Your family is really blessed as well to have you as their pillar of strength, during these tough times of adjustment.

It's been a long time since we had a good talk you and I, almost a year I think? I hope that we can catch up soon, just you and me. And then we get all teary-eyed together like how it used to be. :)

Anonymous said…
Ron,althought you don't know me that close but after reading your blog I just can't help myself from letting my tears fall...eventhough I don't know your dad, I kinda felt the loss...since I was a child I've been wetting my pillow with tears just by thinking of one day losing my parents. Call me a crybaby but that's just how God made me.

Anyways I just want to tell you that you're such an inspiration and a role model.Yes Nikki is right.

I really thank God that you are in YDM.....and I pray that you will continue too just hold on to Him in times of trouble and hardship.
2 Cor 12:9
My grace is sufficient for you for my power is made perfect in weakness......

kangta164 said…
Thanks for the encouragement you guys! It's been tough and i believe it's going to get tougher for me. Do continue to keep us in prayers.

Still somewhat on a high over last night's event. My former school, St Andrew's School celebrated their 60 years anniversary in Brunei. It's quite a milestone especially for a private school in Brunei that started with only 70 students at a church.

And what made the event even more special was the fact that we got the opportunity to take a class photo with the His Royal Highness, the Crown Prince and Her Royal Highness Princess Sarah who was our classmate for a good six years during our times at St Andrew's School. How about it happened is definitely something worth mentioning.


I think I can safely assume all of us weren't actually planning on attending the event. I feel it's been 14 years since we left school, it's still somewhat too 'early' for any form of reunion. Plus, I still see a few of my classmates and teachers around and have many of them on social media so it doesn't really feel like we've actually lost touch. At least that's…
Read more