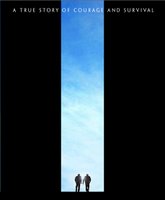 Few nights ago, me and a couple of my friends decided to watch World Trade Center in one of our nation's most prestigous cinema. Of course, there was so much extra effects to add on to the movie that kinda really spiced the whole "climax" that i'm just dying to share this with you guys..

Just as the lights start to dim...right after the trailer, there was rather a strange scent coming from somewhere i'm not really sure. Obviously, that scent couldn't be the smell of the World Trade Center or Nicholas Cage's armpits but if i'm not wrong, it was definitely the smell of...

Mind you, the smell of the crackers was pretty much filling up the whole section where i was sitting and this is the type of crackers where the smell really irritates you a lot if YOU are NOT the one eating it...some more it's not the original flavor but it's the tomato flavor! If that wasn't good enough, they had to chew the crackers so hard to inform everyone that the crackers are indeed fresh from the "cottage"..

Halfway through the movie, just as the towers collapsed (Yes, the World Trade Center did collapse just like the real thing..sorry for spoiling the movie? Heh..) Mr. Oliver Stone decide to just black out a few seconds after that intense moment to which i would probably assume let the whole thing sink in for it's viewers. Well, that'll probably get the audience in the States to start crying the eyes out but not over this part of the world. Instead of absorbing what just happened, the dudes in front of me decided to go and be their own director saying, "Chiewww....spoiler ah!!" and continue to curse their way into the next scene.

But after the towers collapsed, right in front of me, i saw probably 4 pair of towers reconstructed in just a few seconds. Definitely wasn't part of the show. Chinky dudes in front of me decides to rest their legs on the seats in front of them. Probably their legs felt tired after hearing Nicholas Cage's leg got stuck under the rubble.

Somehow the part where it really annoyed me the most was the part where they showed a religious scene. No, i'm not annoyed at the scene itself but to how people reacted at that particular scene. Heck, i don't see a point to why they must express their emotions out..? You don't see me standing up and yelling "Jihad! Jihad!" when one of the towers was on fire do you? 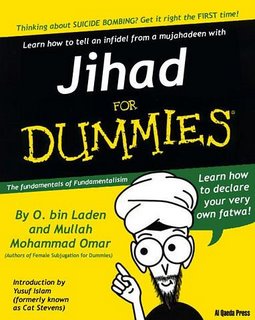 But i guess people kinda got used to the whole "It's just a movie" thing when they're watching it in a cinema...they pretty much forgot that the movie is based on the story of the survivors.

Overrall, the whole movie was not that bad except that it'd be better if i'd bought the DVD and watch it alone at home. Before this, I kinda forgot why i seldom watch movies in the cinema...hmm...

josh said…
honestly, i do not know why people react just like that. what's their problem anyway. maybe we should blame the media, always portraying them as the bad guys. but maybe they really are the bad guys.

my words are in a jumble. but i think muslims who react like what you just mentioned should get educated.

i know muslims aren't the bad guys. but neither is america, or any other country/religion for that matter.

i really like that 'jihad for dummies' image. made me laugh.
1:02 PM