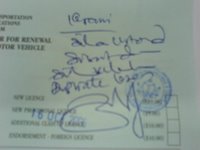 Click on the picture and try to tell me what's written on it. Bet you that no matter how much you squinch your eyes, you can't make a word out of it eh? I'm sure most of Brunei's citizen have manage to come across this writing. Not the handwriting of Sultan lah, but rather the "Pegawai Melesen" of Brunei Darussalam. Yes, that mean dude sitting in his room pressing his number button a gazillion times when calling for people in queue! Seriously, he have some issue with that button of his.

Plus, that was what i've been trying to do for 40 minutes in the Land Transport Department while waiting for my number to be called. The chairs that they made us sit on just reminded me of the time where i was taking that cursed test...except this time, i'm not re-sitting a test but rather, uh re-applying replacing my driving license

That is was first license. Name spelt with an 'O'. What happened to it? Well apparently, Ronald-O's license was in his wallet one day after coming home from church, which happened to be in his back pocket of his jeans. He kinda forgot to take the wallet out of the pocket where the next day after he woke up, his mother told him that his wallet went for a swim in the washing machine. Most of the stuffs inside the wallet were still intact except for a few cards made of cheap materials *coughs* Fitness Zone card *coughs* and *coughs* A.I.A Card *coughs*. Surprisingly, my local identification card is still in one piece despite the notorious complains of it being too fragile.

But unfortunately, my driving license wasn't spared. I should've took a picture of it to show how messed up it was. If my driving license was a human being, i think the perfect cliche to describe it would be 'smashed up so bad that the mother can't even recognize it's own child!' But hey, no biggie right it's just a piece of paper...just head on to good ol' JPD, you can get it replaced.

Well that's what i thought too at first but then that useless piece of pink paper turns out to be more valuable that i thought. In order to get it replaced, you have to make a police report first, then go to the JPD and get approval from the licencing officer, then queue for an average of 1 hour max...and you're good to go. Oh and, you'll most probably have to speak in Brunei Malay all the way when doing this because it seems like English is a really foreign language to the people behind the desk. Can't really be proud saying my Malay language can "jalan" but at least i manage to get my lesen replaced while using it.

Oh, and now the driving license i'm holding on to doesn't have that "One Year" thing on the top right hand corner..instead it's saying "Duplicate". Talk about degrading...pffsh!

i had to wait for 2 HOURS, 20 MINUTES to renew my expired license last saturday...!! from 11.04am to 1.24pm!! and my tummy was making an orchestra the whole time, i bet the ppl who were puasa-ing could hear it!

and that was sth that could be done in like less than 3 minutes?
5:15 PM

But honestly, i hate it when the driving instructors cut line and just chuck a pile of papers to issue license, etc..that's basically one reason why the line is slow...
1:52 PM

EU Fuhrerschein said…
It’s actually a great and helpful piece of info. I’m happy that you just shared this helpful info with us. Please keep us informed like this. Thanks for sharing! Best führerschein kaufen legal service provider.
2:14 PM

Deutsche Fahrerlaubnis said…
This is really a good source of information, I will often follow it to know more information and expand my knowledge, I think everyone should know it, thanks Best echten führerschein kaufen service provider
7:08 PM