That was what dad used to tell us when we were growing up. Bribing us with some form of incentive so we will do well in our exams. I remember for every exam, i would give it all and try to win that reward but after years of trying and not being able to succeed, i gave up. I slowly took up the mindset of 'as long as i don't fail or get unplaced in class, i'm safe!' My dream of visiting Disneyland also slowly vanished as i grew older after realising how far the actual place is from Brunei.

But back in 2008, i managed to live the childhood dream i've always wanted. A trip to Disneyland in Hong Kong with my family!
I remembered being all excited and trying to get on every ride even though they are clearly meant for kids. We spent the entire day there trying to make use of the money spent and making every moment worthwhile but for some reason, there was something off about this.

Everything was dubbed in Cantonese. The princesses, princes and dancers were mostly asian/filipino looking. It kinda felt like i was in a bootleg version of Disneyland. I still enjoyed myself by the end of the day regardless cause i managed to get the Disney 'feel' out of it and also got to see all the familiar characters that i used to watch on tv.

Three years later, here i am again only this time at the actual place. Disneyworld, Florida! If you didn't know, the Disneyworld in Florida is divided into six different themed parks (Magic Kingdom, Epcot, Disney's Animal Kingdom Park,  Disney's Hollywood Studios, Disney's Blizzard Beach and Disney's Typhoon Lagoon) and since this trip was meant for Calla's niece to experience the wonders of Disney, we all figured the best place for her to get that experience would definitely be in Magic Kingdom. You know, with all the princesses and Disney characters running around, it's definitely every child's dream come true. When we got off the ferry boat and arrived in downtown Disney, i felt like i was at the exact same Disneyland as the one i went to in Hong Kong - just minus the thousands of Asians.

Like Universal, we only had a full day to spare at Magic Kingdom so we tried to make full use of time. Now if you do plan to make a trip to Disneyworld, the one thing you need to stock up with you - patience. Lots and lots of it because the queue for rides here are absolutely ridiculous. If you do not have kids, i wouldn't really recommend you visiting Magic Kingdom unless the only purpose is you want to experience the Disney magic for the first time. If you're into thrill rides like roller coaster and giant drops, the only decent rides for adults you'll find in Magic Kingdom itself are Splash Mountain (which happened to be close while we were there) and Space Mountain. The rest are pretty much rides for the kids hence the reason why you need lots of patience to be in Magic Kingdom cause your kid will most likely wanna ride on everything they see. The average wait time to go on a ride would be 40 - 50 minutes if you're lucky. Popular ones would definitely exceed more than an hour.
Having been to the Disneyland in Hong Kong, i can say most of the rides that my family and i went there can be found in Disneyworld. Of course there are a few more extra rides in the Florida version but i would think the Disneyland in Hong Kong carries mostly the main attraction and popular rides. I definitely did remember going on Space Mountain back then with my sisters as well as watching my very first 3D animated cartoon, "Mickey's Philhar Magic" in Hong Kong which i did it all again in Florida. The 3D experience watching this animation was still so much better than me watching Avatar in 3D.
One of the new things that i got to experience this time around in Disneyworld is meeting and greeting the princesses. Yeah, not just one princess but three princesses! Initially, i told Calla that it would be cool (in a joking but yet serious way) to get pictures with them since we spent time queuing for Isabelle (read: me) but once we got inside the room with the "princesses", we decided to pull out from our my plans. Let's just say after hearing how the princesses converse with Isabelle about fairy godmothers and wishes coming true, it definitely helped us decide adults should leave this territory for the kids. I honestly would't know how to answer or react if Cinderella asked me how has my fairy god-mother been or if Sleeping Beauty mistook me for her prince charming. Lol! By the way, I heard these people are also well trained to talk 'magical' and are required to stay in role as long as they are within the compounds of Disneyworld. No kidding, if they say they can fart magic dusts, they will eventually make it happen right in front of you! That's how convincing they are with the whole magic talk.


The other new experience was riding on "It's a small world". I remember seeing this in Hong Kong but decided to skip it since it did look kinda weird and kiddish. I initially thought it has something to do with small houses and people where everything's shrunk to make us feel like giants or something. Since the wait time for the one in Florida was relatively short, we decided to go on it.

After riding this for the very first time ever, i soon learned the hard way why the wait time was so short. Sitting on a slow boat ride, you'll end up listening to kids singing "It's a small world" over and over and over again in different languages for what feels to be like an eternity. That was by far the worst form of  torture any adults need to go endure during their visit in Disneyworld. What you'll also see is a lot of  dolls dressed up in different cultural costumes singing the freakin' song over and over again.


I kid, i kid. Towards the end, they were all dressed in white and singing the song in English which i would assume signify unity claiming that the world is indeed small regardless of what country/language you speak. But i wouldn't be surprise if some people think it can also be heaven. Haha. Another ride i got to go on was "The Haunted Mansion"which was probably the only ride i was looking forward to.  I remember watching the VHS over and over again when my parents brought it back with them after their honeymoon in LA and wished i would get to experience this one day. 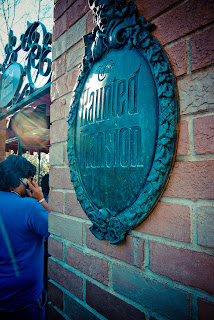 Despite this age where there are 3D graphics and realistic looking animations, i still thoroughly enjoyed going on this ride even though the ghosts and ghouls inside the Haunted Mansion looks kinda old. I think this would count as enjoying the Disney experience. By 9pm we were all exhausted. I would think even kids who are always excited about Disneyland can get tired after spending almost more than ten hours. We ended our little adventure with watching another parade (it seems like there's always some sort of parade every few hours in Disneyworld) before we call it a night.


While watching some of the Disney characters parade in front of Cinderella's castle, i found out the embarrassing way that my knowledge of Disney cartoons are quite limited. And i got it all on video just for you.