My not so wise wisdom teeth

January 05, 2011
Lately, i've been thinking about getting a total makeover...for my teeth. Like many, if not, most of you guys (and girls too!), i only visit the dentist when i get a cavity or if i get some sort of toothache. I know we were taught back in school that it is important to visit the dentist every six months to maintain a good healthy set of teeth but just like all kids, i too was petrified of going to the dentist. And because of that, i suffer the consequences today... 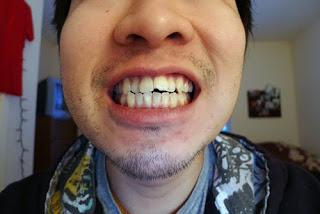 My not so pretty teeth with a slightly chipped front tooth courtesy of an iPhone 3Gs.
Thinking back about my school days, i regretted not taking the opportunity of utilizing the free dental care provided in our school. The only fond memory of me being in there was probably back in my primary school days where during my break time, i would hang out with a bunch of my classmates in the dentist's office and have our food. After that, we get to brush our teeth with the dentist's electronic brush cause the dentist was nice enough to let us use it.
Growing up, my teeth has never bothered me as much since i never judge beauty by its teeth. Teeth are simply not one of the first thing i take notice of when i meet new people. I know my mom does that a lot especially when she watches television. I remember she would sometimes judge a contestant's set of teeth instead of their voice when watching American Idol. And whenever she talks about teeth, she'll proudly show off her naturally straight set of teeth saying how she never gotten braces before.

Somewhere during my high school year, my mom insisted that i get some braces for my predator like teeth. When she told me that, i was filled with mixed emotions which i can still clearly remember today. First, i was reluctant to do it because i picked up smoking and i was going through that 'phase' of looking cool (at least i thought it was) with it. Secondly, part of me wanted to get braces because i remembered a few of my friends shedding some weight during the first few months after getting them due to a change in diet. I wanted to lose some weight too. And then i was reluctant again because i heard a few of my friends had to pull out a few teeth and some said it hurt really bad. So i was caught in the middle where i decided to go with the flow. In the end, after going for a few appointments with one of the local dentist back in RIPAS, for some reason she said that my "gums were not strong enough to put braces on" so i was off the hook. Until today, both my mom and i think that the dentist was just coming up with an excuse so she can keep her patients to a minimum because she was the same dentist that did my sister's braces and it took her almost six years to get everything done.
So here i am few years later regretting not doing it because right now, i wish to have a nicer looking set of teeth. With uni in the way and costs of getting it done in New Zealand being too high, i can only hope to get my braces done probably after i graduate. But since i'm in the 'mood' for a better dental hygiene, i decided to get my teeth examined by a local orthodontist, Dr Philip Harmeson in Traverse City, Michigan. 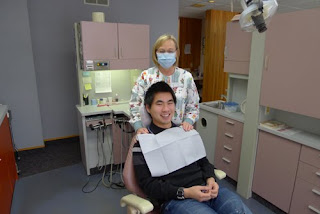 Peg, the lovely assistant at Dr. Harmeson who did my X-Ray for me.
I have never gotten any X-Ray for my teeth before so i was quite amazed at how it was being done. The whole process took about 20 to 30 minutes where they take individual section of your teeth so the doctor can examine it. If you have bad gag reflex with having plastic stuff being put in and out of your mouth, you might have a hard time going through it. Here's how the inside of my teeth looks like!

Each film displayed are taken individually so in total, i had to take 18 shots...
What i found out today is i've got two wisdom teeth growing totally the wrong way which need to be removed asap when i can otherwise, the according to the doc he said "few years down the road you're gonna be suffering!" I'm not sure if it's a common thing for wisdom teeth to grow this way but i find it really freaky!

A clear illustration I edited on my X-Ray film to explain where my wisdom teeth are heading...
If someone can grade a tooth's intelligence, i think mine can be considered dumb to stupid for growing that way. So much for wisdom in it.
dental me

Chester said…
Apparenlty this isn't all that rare. I had a friend who had the same problem.
10:23 AM

Frangelika. said…
LOL was it Dr Grace? I also went through the same thing. but for me her excuse was "oh you have a hereditary problem with your top two front teeth with 'longer bone' so even if you put braces, u might have to wear it for the rest of your life in order to keep them straight. unless you do SURGERY to make the bone shorter" or some crap like that.. btw yea alot of asians have wisdom teeth growing horizontally. cuz we have a naturally smaller jaw. its normal! me and grace both had it that way and got it taken out (if not it'll compress the rest of your teeth even more when the wisdom ones grow bigger.
1:48 PM

ronckk said…
I can't remember if that was her name but she was quite a 'popular' dentist among the mothers. But judging from the reason she told you, it sounds like we're talking about the same dentist. Haha. She said something about my gums not being strong enough and if i put on braces, most of my teeth will fall off. Talk about scare factor. :P
3:54 AM

Emmy Summers said…
Most of the dental cases are hereditary like, the color, length position and size. As they say a mango tree won't bear an apple. But nevertheless, you can always have them treated, especially now that almost everything is possible. And if you want to do something to improve yourself, do not always do it because of your friends. Do it because you need it, and not for the reason that you are "IN".
11:48 AM

Nature made vitamins said…
Some time we are very concerned about our health, we do not understand what to do ... It's very easy to make better health. we must use Nature made vitamins. Vitamins function in many metabolic reactions which take place as food is utilized in the body, Vitamins control metabolism and energy of our body.
2:29 AM

Darrin Husak said…
Teeth braces are the best solution for teeth like yours. A lot of people don't consider proper oral hygiene as an important factor for healthy living. Little do they know that dental problems can lead to other more serious problems in the body.

Elfrieda Sevigny said…
I just noticed that you had crooked / misaligned teeth, also known as malocclusion. This is actually dangerous to our health, because it can affect your jaw and can be a root cause of gum inflammation that can cause headache and chronic illnesses, such as heart disease.
8:21 PM

Donnell Nash said…
thank you so much, ma'am, you are truly a gifted teacher, You’re a very brave wait so wisdom teeth can change your jaw appearance?
2:33 PM