January 11, 2011
It's quite surreal to be standing in front of a humble, modest house when you know your idol once lived there. While visiting Michael Jackson's childhood home wasn't part of my agenda for my trip here, it has definitely made it to my one of the top memorable moments being in the States. Both my girlfriend and i, together with her sister and brother in law decided to make a little detour in Gary, Indiana while trying to catch a train ride to Chicago and it wasn't hard to find the humble home where the legendary King of Pop once grew up in...well at least not with the power of Google! 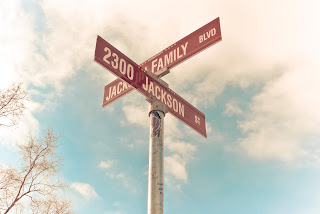 Street named after the Jackson family 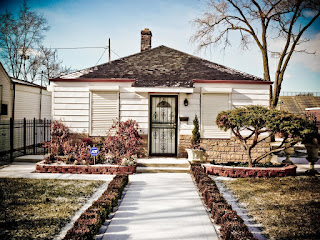 If the house did not have any monument of some sort, i think we would probably not realise that the house used to be where he stayed and grew up in. I'm not sure who is currently occupying the house at the moment although part of me felt tempted to ring the doorbell just to see if anyone answers but judging from the appearance of how the house looks on the outside and comparing it to all the houses around the area, it looks really well maintained and protected. Maybe Jermaine Jackson and his Jermajesty kid is in there somewhere. Looking at pictures of the house from two years ago when the news broke that legendary King of Pop died, there wasn't any gates surrounding the house and it seems like anyone could have easily accessed through the area then but too bad it's all gated up now. 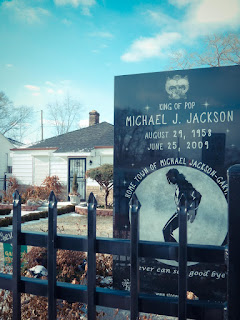 Monument stone by the house 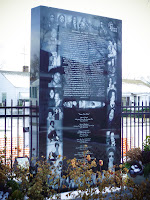 There's really nothing else to see other than admiring the small little house from the outside and reading the messages engraved on monument with messages written by fans around the gate and poster left at the area. Engraved behind the monument shows a quick history of Michael Jackson's life, achievements and his legacy ending with lyrics from his song "Gone Too Soon". While hanging around the area, there were a few cars probably from around the neighbourhood passing by the house and giving us thumbs up. I'm sure it's a common sight for them to see random people taking pictures of the place since it can be considered as a tourist destination now. Another common sight around the other area of Gary, Indiana doesn't seem too pretty on the other hand. Empty houses, some burnt down while others rotting away left with abandoned cars are almost everywhere. But i'm sure for some of the neighbours staying around the area, that morning when i visited 2300 Jackson Street wasn't quite a common sight for them... 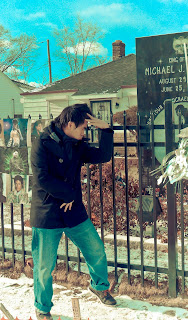 Anonymous said…
Nicely written. I too have always wanted to visit the house. I don't know how many time I have driven by Gary and thought about stopping. It was great to experience that with another "true" fan of MJ. Strange that looking at a small humble home where someone grew up can make to it the top of my "Things I've done" list, but it is. So glad that we stopped so you could experience that.
8:28 PM

Anonymous said…
I took a King of Pop tour to Gary Indiana just after Michael died. It was a great tour that took us all over Gary to see where the Jacksons went to school and church and Joe Jacksons place of employment. We also traced the route that Joe walked home every day from work. We also managed to find someone who owned the identical house across the street and piled in 11 people to see how cramped the space was. It was a amazing experience.
11:57 AM

keita said…
i am planning a trip to 2300 Jackson Street this summer. Wanted to be in L.A. this June but wasn't to be maybe next year. I am happy to have found your blog and maybe after my trip (God willing) i will share my pics and experience. With MJ love
keita
12:40 AM

Custom vitamins said…
Nice Post and very informative...
Thanks for sharing such info...
5:07 AM

Anonymous said…
I visted 2300 Jackson Street on July 22,2009 a little less than 1 month after MJ died. I told my mom they should fix this place up. I met Latoya Jackson on June 24,2011 at a book signing. I found out soon after that the house was redone. I am soo happy for the Jackson family that they gave the house the TLC that it deserved. I sure that Michael was smiling down from heaven when he saw this miracle happening. It's like sacred ground now as it should be. Your memory will live forever in my heart. My love for you MJ is an understatement. Paula
12:41 PM