January 14, 2011
Ah Chicago! Chicago, Chicago, Chicago!! I don't even know where to start about my first trip to Chicago. Calla planned this trip with her sister just to get me out of Michigan since last year i spent my entire trip only within the state so she wanted to bring me someplace different. Since getting there was relatively inexpensive, i thought it would be a great idea to explore a new place. It took about three to four hours for us to get from Michigan to Indiana due to massive blizzard on the way there. It's probably the first and last time i would ever wanna experience that although it did give me a different kind of excitement. Maybe more of an adrenaline rush of some sort. But I'm glad my girlfriend's sister, Jenn handled it well behind the wheel while her husband, Al helped with navigation. Here's a clip to show you how bad the road was! 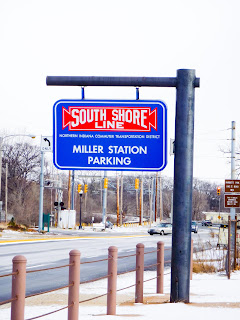 Thankfully, we made it through safe and sound. By the time we got to the train station, we found out the train left not too long after we got there. The next train scheduled to arrive was going to be after three hours time so we were deciding whether to wait or to drive all the way straight to Chicago. We ended up take our time instead of rushing and since we were in Gary, Indiana, Jenn suggested why not stop by 2300 Jackson Street and check out the house where Michael Jackson grew up. We did just that and even stopped by KFC for lunch. We later found out another train bound for Chicago that's passing through the town we're already in so everything went pretty smoothly. The train to Chicago was pretty smooth with a few stops on the way. Took about an hour or so to get from where we were to Union Station in Chicago.

A funny incident happened during the train ride there. Jenn asked a lady sitting across us if she could help take a group picture which she was glad to. As the train was approaching Chicago, she probably overheard our excitements (or more like my own excitement) and figured we might not be from around there so she politely asked if we were showing someone around (the 'someone' being me most likely since i am the only foreign looking person around there). I didn't really bother with the small talks cause i'm not good at that so Calla and Jenn did all the talking while Al and I entertained ourselves with some MJ songs still trying to get over the fact that we were at his childhood house.


As we were getting off the train, she came back to us again and randomly asked if any of us were a member of the Rotary club. We said no and then she just continued blabbing on about how they're organising something special for foreign exchange students and all that. We all just cracked a smile and thanked her for the info and went our way while making jokes about me being a foreign exchange student later. After getting off the train, we were standing right in the middle of down town Chicago and the first image that i saw was yellow cabs, tall buildings and busy traffic. For some reason, seeing that put a huge smile on my face cause i felt like it was another dream that came true for me to be in a big city. Not just any city but one of those cities you see on television. The one with the yellow cabs! 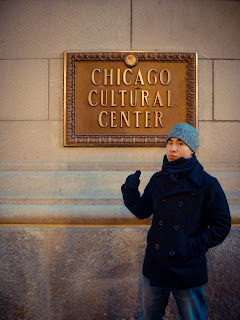 Although New York is more of a dream place for me to visit, i think this is as close as i can get to experience a pinch of the city life in the USA which is good enough. Another thing i tend to look out for when being in a new place is asians. Chances are if you see lots of asians in a place, it's most likely a city. If there's none, then you're probably stuck in a rural or village-like area (or in Brunei we say kampung...lol!) and true enough, i spotted one in a few minutes. I just love to do that for some weird reason. If you can't find one, try looking at your nearest Chinese restaurant. They always come with one otherwise, it's not really authentic. :P

After checking in to our hotel, we went exploring around the city. Since we're on a tight budget, we didn't plan to do any shopping at all for this leg of the trip so most of the stuffs on our 'places to see' list are free. As we got in pretty late, most of the places were closed but we managed to stop by Chicago Cultural Center which is free for those interested in art. If i'm not mistaken, there are different exhibition going on every few weeks so if you do plan to drop by there for a visit, be sure to check out their website to see what's showing. I got to see the work of a street photographer Vivian Maier when i stopped by the center. Some of her work was shot with the old school Leica camera.

Spent around an hour or so there and then we decide to walk around some more to see what else the city has in store. Calla spotted a Forever 21 store and couldn't resist the temptation of not going in. So far, i think i've only been to two Forever 21 stores, one in Singapore and another one somewhere in Michigan but too bad i'm not a girl cause the one in Chicago would probably make me feel like a kid in Disneyland.

We had dinner at Ed Debevic's that night which i'll blog more on a separate post cause i think it's worth sharing my experience. After dinner, we were contemplating on walking over to the Sear's Tower to check out the view of the city but figured it was too late and we were getting exhausted from all the travelling. So we decided to head back to our hotel to get some rest.


And that sums up the first day of Chicago for me. More to come on the second day!
holidays travel usa