June 30, 2010
Sooo if you haven't know yet, ever since i got kicked out of the student apartments, i've moved in with a friend who was kind enough to offer his place. I remembered when he picked me up from the airport, he told me a little about this other flatmate of ours, her background of where she comes from, how she has her little 'rituals' in the kitchen of certain things being certain ways and also asked me what i thought about single woman in their mid 30's coming to 40's staying alone, not married or dating. In order not to offend any of the readers who might be under that category, i shall not say anything but i did mention to my friend that as long as i keep the kitchen clean, respect her privacy and have some common courtesy, i shouldn't be too worried about upsetting her.

I've been staying here since March and guess what? Today she *finally* snapped at me for the very first time...over a freakin' bottle of mayonnaise. Why i said 'finally' is because i knew it was coming as for the past few weeks, it was obvious she's been annoyed with me over something which i have no idea. No, it was not because of me using the mayonnaise or touching any of her stuffs cause that's just plain rude. The bottle of mayonnaise is mine to begin with. Then again, i think it's not really about the bottle of mayonnaise, it's more about... 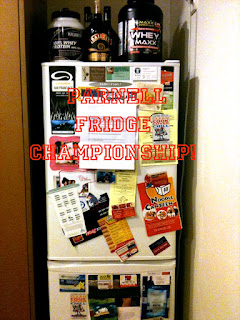 THE FIGHT TO SEE WHO WILL WIN THE FRIDGE CHAMPIONSHIP!
That's our fridge at home. Honestly, i'm not complaining anything about this fridge cause it's still way better than sharing a smaller fridge with five people back in the student apartments so to have this fridge split among just the three of us, i'm really really happy. But wait, let me show you what's inside. 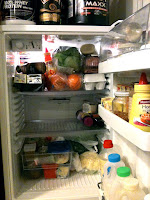 This is how it's like inside. Don't you find it weird how it's placed this way? A normal person who open this fridge would think the top is too stuffed up and would probably think it'll be better if some of the stuff goes below but because we're competing in this fridge championship, that would earn you a disqualification so no, you are not allowed to do that even though you are granted the permission by the owner of that section of the fridge. Trust me, i've tried on several occasions where i wanted to borrow a space and somehow, it's like Toy Story inside whenever i close the fridge because when i open the the fridge the next day, whatever stuffs i placed on the borrowed space will somehow just move back on it's own to my crammed up space. Oh just so we're clear on whose space belongs to who, this next illustration should make it very clear to you... 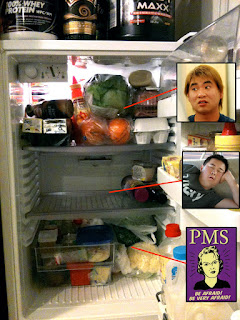 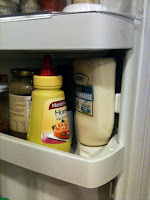 I'm taking the first shelf while my friend is taking the second shelf. He hardly cooks so his space is usually quite free where at times, i would borrow some space for my groceries but the lady below apparently despise that. I really don't know why. Maybe she thinks if she can't put her stuffs there, NOBODY CAN. Anyway, here's what happened today.

Meet Heinz. Last name, Mayonnaise. Middle name, Lite. This is where Heinz has always been. Next to it's best friend Mustard. As far as i know, i've always put Heinz there ever since i started using it because there's just where it feels normal to put it. For the past four months, old Heinz have moved out, new Heinz moved in and there haven't been any problem whatsoever because....well, let's just say good ol' Heinz pays his rental on time. So he deserves the spot. Of course unless someone offers a higher rent then maybe the landlord might consider relocating him but otherwise, it's always been good for Heinz. However, one day, or should i say today, something happened. I open the door and lo and behold, poor Heinz was staring at me... 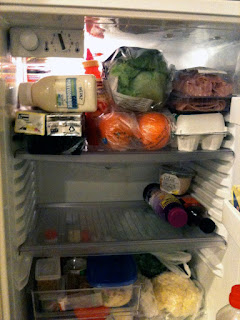 And this is literally a WTF moment for me. Not WTF because someone touched my mayo but more of a  WTF-really-of-all-places-to-put-my-mayo... 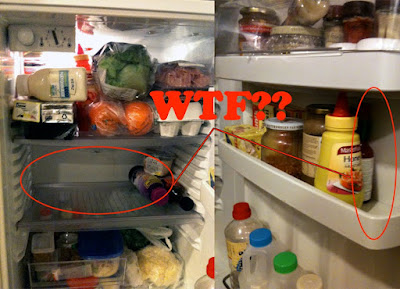 So i thought to myself, well since no one's using that spot i don't know why she would mind if my mayo occupy that space considering it's always been there so i put it back to where it normally would be and pour myself a cup of drink. And then i hear footsteps. Heavy stomping, pissed off footsteps coming down. It's like as if she's been spying on me, expecting me to make that very move just cause she could take a shot at me because funnily, that's the first thing she did when she came down from her room. Opened the fridge. The moment she saw the bottle of mayo was put back to where i normally put, she freaked out and started snapping at me like as if i owed her a lifetime supply of salmon sashimi! After lashing out at me, i stood there, dumbfounded and the only thing i could muttered out of my mouth was simply: "WOW" while she stormed back into her room.

After getting over the initial shock of being scolded by someone out of nowhere, a rush of anger came over me and i was pissed. I thought it was quite uncalled for to be scolded when she could have just told me nicely that she didn't want the mayonnaise to be there. Oh, her reason for not wanting the mayo to be there was because she said whenever she opened the fridge, it ALWAYS fall out on her. After i cool down, i decide to try a little experiment on my own...


What do you know? Nothing fell off. If i open the fridge any harder than that, I seriously think the door might fall off so i don't know what she was bitching about. I just personally think it's either she have some sort of a grudge against me or she just don't like my bottle of lite mayonnaise. But i definitely can tell you one thing... 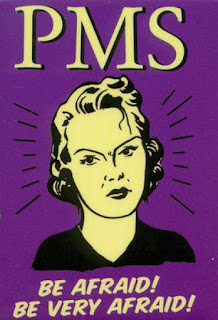 
P.S: Maybe i can try hook her up with my ex-flatmate. I'm sure they'll make a perfect couple.
flatmate nz