March 16, 2010
It's been a crazy adventurous 3 weeks since i got back from my long 2 1/2 months holiday in Michigan. The pressure of being back in uni is already starting to get to me especially being somewhat of a freshman again except this time, you're suddenly in the second year (technically first year since i pulled out from my second semester last year).

I just got back from a 7 hours tramp (hike for everyone outside of New Zealand as the word 'tramp' can be misinterpreted) at Tongariro Crossing with a group of friends over the weekend and all i can say is WOW! As painful as the whole walk was, once we've got to the peak and looked around us, i couldn't help but to praise God for creating something so beautiful. 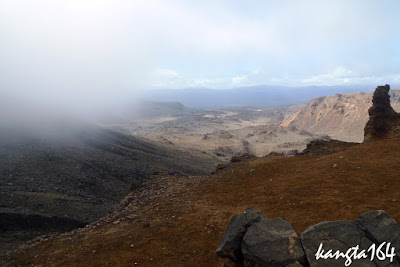 This was my first major tramp that i've ever done in my life and obviously i was had no experience whatsoever in doing stuffs like these other than doing little hikes back home in Brunei at Tasek Lama. I still consider that as an experience so that's what i brought along with me to do this Tongariro Crossing. With that in mind, i was so focused on preparing on how hot this whole hike is going to be that the thought of it being freezing cold never really crossed my mind. I was more worried on getting sunburn, dehydrated and all sweaty. Plus, we are still at the end of summer here so really, how cold can it get right?

Let's just say that thought almost made me get frostbite because the weather up there is freezing cold! I was so unprepared that all i wore for this trip was 1 sleeveless running shirt, 1 tight fit running shirt (to change in case i get all sweaty), 1 normal TShirt (to change AFTER the whole walk), a jacket (just in case it rains) and freakin' basketball shorts. 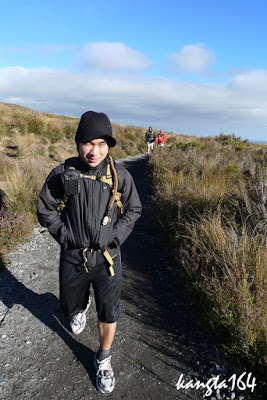 The moment when we arrived and i saw group of people all covered up in thick jackets, preparing themselves as though as they're gonna conquer Mount Everest, i knew my experience of climbing Tasek Lama was as useless as the nose booger that you flick off your finger. Nevertheless, i tried to brush it off and play it cool pretending that the weather wasn't too bad at the beginning. 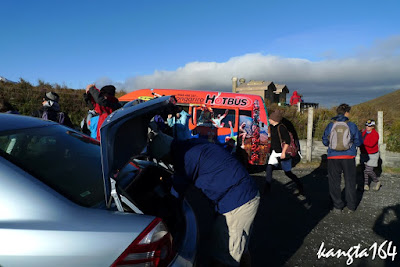 We started our journey at approximately 9.30 am taking our own sweet time at a slow pace just enjoying the view around us. Initially i was making a quick head start cause i was eager to finish this whole thing as fast as i can but was forced to slow down as we were waiting for some friends to catch up. But the moment where we walked past a sign that 'warned' us that if we feel we are unfit, we should turn back. And that was where the real adventure begin. 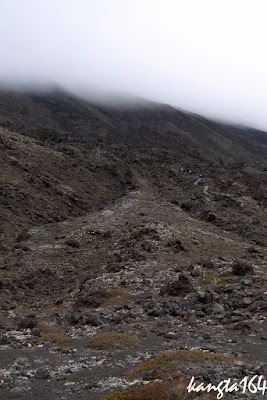 For an hour or so we had to climb this massive stairs that seemed like it will never end. It used to be name the "Devil's Staircase" because it was so steep that a lot of people couldn't make it so they changed it to be more of a zig-zag walk instead of a vertical stairs all the way up. Even with the zig-zag way, it was enough to take the breath out of everyone by the time we reached the south crater. 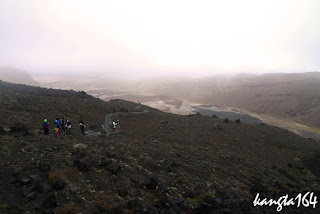 From the south crater, comes the most challenging part of this whole crossing where i personally felt like i was about to die. At this point my hands were freezing cold, i was wet and miserable and the only way to get up to the next point was to cling on to rocks and make sure you don't slip and loose grip. One wrong move and you might just fall and die. I am not exaggerating or kidding here. Gripping on to the rocks were excruciatingly painful especially with numb hands. It was such a huge relief for all of us when we got up there because on the way up, we also see a lot of people turning back as the weather was getting worse. 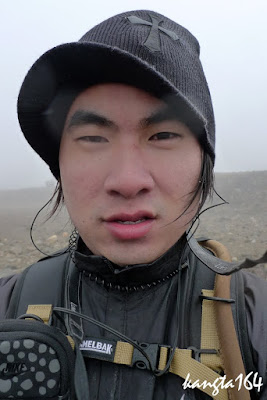 Me being miserable, wet and freezing cold. And it is only here i found out what exactly getting wind burn means.
At this point, a lot of us were overwhelmed with emotions especially when we realized how hard it had been and not knowing how much harder it was going to be. The thought of giving up started creeping in and that was where teamwork kicked in. Thankfully we had a good mate who was just constantly giving positive encouragement and making sure that we were going to get through this together. I happened to snap this picture on my phone accidentally and looking at it now, i think that was definitely a good moment between this two friends.. 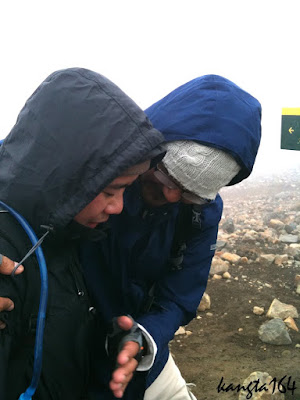 Once we've reached the Red crater, we did not spend too much time enjoying our achievement as the wind blowing up there was ridiculously strong and we felt it is safer to move on as we do not want to be blown off the cliff. So we made our descend to the Blue Lake. Mind you, people always tend to say going downwards is much easier but over at Tongariro, going down can be quite a challenge especially when there's nothing for you to hold on to and all you do is slide down slowly, praying that you won't roll off the edge. Your only source of protection to stop you from sliding down are the small rocks lying around. 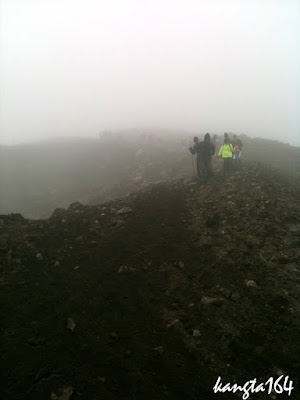 Not long after going through this part, we reached the Blue Lake which was the highlight for most people as it can be quite fascinating to see a really beautiful blue lake sitting in the middle of no where. Here we just decided to take a break for 30 minutes or so just fueling up and regaining all our energy. By this time, both my legs were really sore and we still had another 4 more hours to go. 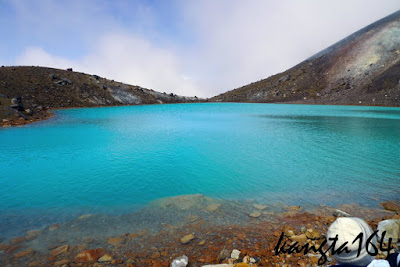 From here onwards, it was just never ending walks and after 4 hours of continuous walking, getting 2 thigh cramps at the same time, we finally made it out...alive! The one thing i thoroughly enjoyed about doing this was walking by people and seeing how positive most of them are and just giving encouragements to one another even though we are all strangers. And to think that we made it through the crossing in one of the worst weather that ever happened, i just had to give myself a pat on the back whether you like it or not. :P There were some point while we were going through different areas, i felt like we were on Mars or something cause everything just felt out of this world especially with the thick mist and rocks everywhere. 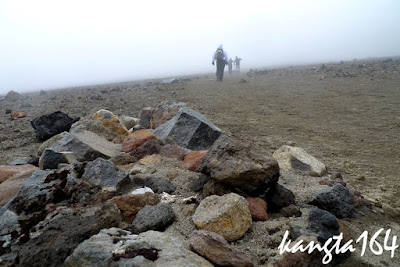 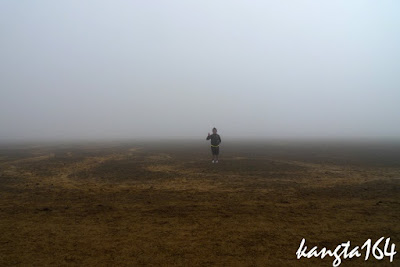 "I come in peace"
All in all, it took us about 7 hours to complete everything but if we were to start off without waiting, we could have finished everything within 6 hours? Well, the main point was we still managed to complete the whole crossing without giving up so that was really something we were all really proud of considering neither one of us had any experience at all. There's a possibility a few of us might do it again but i am sure this time, i will come prepared. Prepared as in, i will not freeze up my water pack and make it ice just so it can 'melt in the middle of the trip and i can enjoy cold water throughout the journey'. That was seriously the most stupidest decision i ever made cause i went through 7 hours of tramping in a freezing cold weather with a frozen ice pack that hardly melt when we finished.

Then again, that just shows how ignorant a Bruneian can be.
nz sports

Cal said…
Just getting some quick feedback on the Crossing. Love a comment if you have a minute. http://www.walknz.org.nz/2010/03/19/how-did-you-rate-the-tongariro-crossing/
5:45 PM

Anonymous said…
If i ever go visit u in NZ,u must bring me der! hehehe..and u're so silly to freeze ur water. u shld haf done some research first before leaving for that place. The blue lake is AWESOME! so beautiful - Michelle B
11:00 AM