March 25, 2010
Today i had a discussion with a group of friends about the Bible while studying the book of Ephesians. When we got to this verse that said; "Like the rest, we were by nature objects of wrath." Jeff, who was leading us in the discussion just threw out the question, asking us what we thought of that verse. There was about a minute of silence before one of us started doing literal definition. of 2 words from that verse

"Dictionary on my phone defines object as a lifeless thing." said one of us. Then another one said, "Wrath pretty much means anger or fury right?". I re-read that verse again with the new definition in my head and my heart started pounding. I wasn't sure if it was excitement or fear because what my mind got out of that new translation goes along the line of; By nature, we were something that were meant to be hated. Or in today's language, we're literally full of $#!@*. We're so filthy and sinful that God just had his wrath marked on all of our foreheads. We were pretty much on a highway to hell. *cue music*

But, then there's Jesus Christ. He was so filled with love for all of us even though we do not deserve any of it. So he pleaded with God to give us another chance to redeem His love. I would think God could have possibly been reluctant initially when he heard Jesus asking Him to give us another chance. Have you ever wanted something so badly that you had to constantly bug your parents over and over about it where in the end, they just give in BUT provided we do something? And that was what Jesus did for us. He managed to get God to give us another chance to redeem His love provided that He (Christ) come to earth and live a blameless perfect life but yet, must die a horrible death and on top of that, bear our sins and hatred that was marked on all of our foreheads. And that was exactly what He did. Christ came, walked on this very earth we are currently walking on and died. That was the story we all know but today our discussion somehow went down a more adventurous route. We talked more about that crucial part where Christ was on the cross.

Personally, i felt this was the part i tend to overlook on. I know for a fact that my sins were crucified upon that cross but i never really put much thoughts into how it was done or more specifically, what Jesus could have possibly felt bearing the wrath of God that was supposed to be on us and just taking it upon Himself. When the horrific cries of Christ on the cross rang in the air (as written in Mathew 27:46) "Eli, Eli, Lama Sabachthani?" (My God, My God, why have You forsaken me?), i really wonder how it must have felt to feel so lonely and abandoned. It is at that very moment, God just had to turn His back on Christ because He was so filled with all of our sins that even God Himself could not love Him. I don't know about you guys but have you ever had that feeling where the ONLY person you loved the most just walked away from you? That only moment where you need that one person you love the most to cry on, or to fall back on but he/she just turned away.

It was there that our sins were being placed on Christ which makes the cross so significant. As Christ was bearing the weight of our sins, he had to face the only time in all eternity, the abandonment from His loving Father. And when that whole process was completed, all that was left to say was... 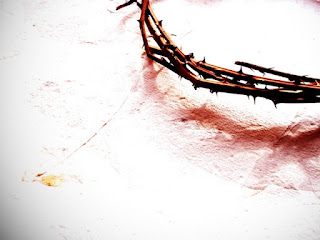 "It is finished."
God

Len said…
a wonderful thoought-provoking post, Ron. Sometimes we fail to think and appreciate what Christ has done to save us long long time ago and just take forgranted that we are forgiven, not bothering to take a sit back and reflect on it all. Many times in our lives we thought ppl have just left us, or abandoned us, but what would it feel like when the one and only person to love you for all your flaws and imperfections just totally turn their back on u, now that's on thing we never thought of. Thanks for the post, Ron. And it came at a no better time, considering Easter is just next week.
3:41 PM

Unknown said…
Wow. It's overwhelming to be reminded of how we were saved. Yet more so to stop and think about how Jesus felt, what He did and why He did it. Thanks for a 'slap-in-the-face' (Well, not as bad as I may have made it sound) kind of post. =)
6:12 PM