I have a girlfriend!

December 25, 2009
Well in case you haven't seen, my relationship status on Facebook is no longer single. I still find it funny how our lives are all revolved around Facebook whereby if it's not on Facebook, it's as if it does not exist in reality. Although it has only been days since the 'official' announcement on Facebook that "Ronald Cheng is no longer listed as single status" (which never quite make the cut to my wall page by the way), reality is that between the girl and I, we've been together for more than 5 months. Yes, yes i know some friends of mine might find it incredibly annoying and irritating that i may not be 'friend enough' to tell them this news when it happened 5 months ago but the whole decision of just keeping the relationship on a hush hush was really because the both of us just wanted to get through this first on our own without getting 'constructive criticism' on how our long distance relationship will never work out.

So, i would assume most people have the burning question on how did this whole thing began? Or for those who do not know who she is, who exactly is the girl? How did we meet?

The story on how we met was when she was in Brunei for a short stop over after spending 2 1/2 months in Indonesia doing missions about a year and a half ago. That was the day where you can say we officially met since she was around and i've seen her but we never really talked at all just cause i felt a bit intimidated by who she is. So instead, i just decided to just spend more time having fun with Aydan of NZ who was also a member from her team. That was that cause after they left, life pretty much went on.

Earlier this on, i finally started a new chapter in my life with continuing my studies in NZ where it was quite a hype for everyone especially for me cause i thought i might get to meet up with Aydan again. He was supposed to fetch me from the airport but unfortunately, the kiddo didn't show up at all. That was where i got my first message from her. 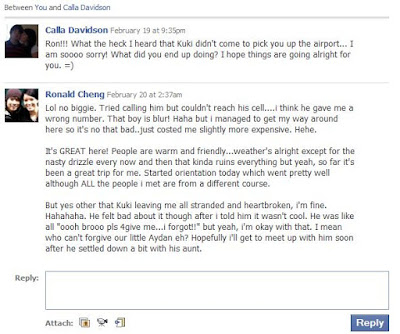 After that one message, uni life was just slowly starting to settle down. That's where i got another random message from her. 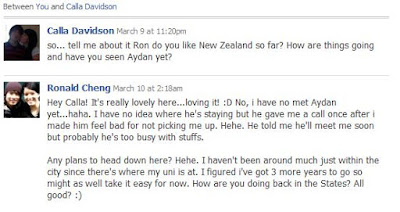 I would think this was the part where our little chapter began. We just started exchanging messages almost everyday. I looked forward to getting replies from her everyday and to be honest, i did feel like i was being a bit anti social just checking up on Facebook every single day even in uni. Haha. Short messages started getting longer and we started sharing our life stories. From messages, we moved on to just chatting with each other every single day online and a few months into this whole thing, there definitely was a connection between us. We shared similar qualities and views on many things and the more we found out we had so much in common, the more we felt we were really meant for each other. I know it's cheesy but tell me which love story isn't cheesy? :)

Eventually, we started making phone dates which was nerve wrecking because i always felt like from a non asian's perspective, we asians talk funny. I was 'accent conscious' so i thought i would make things feel awkward between the both of us. I remember the very first time i decided to give her a surprise call just cause the internet at her house was acting up, i stammered my way through and God knows what i talked about that day but eventually, it went pretty well. From phone calls, we made occasional Skype video calls to one another just to make sure we haven't lost a nose or an eye during our chats and call sessions. I would think the most hardest thing about starting a relationship doing long distance would be paying for the SMSes. Based on experiences, the cheapest country to offer good rates for texting overseas would be Singapore cause you always get bonus free messages in return once you have sent a certain amount of texts. Most expensive by far would still be Brunei. Haha.

After months of just getting to know her, it was clear to the both of us that we had feelings for each other but the only thing that was holding us back was the thought of what we're going to do with this relationship so i knew this was the point where we'll have come up with something else. There will come to a point in life where everyone always gets this feeling where it feels just so right to do something and that was my point where i feel it was just so right to purchase a flight ticket to Michigan to see her so after finding quite a good rate to fly myself over, i decided to just take the risk. This was before we even got officially together and we were at the whole just a friend plus a little bit extra stage. Initially i had a crazy thought of just surprising her with my trip but i thought that wouldn't turn up too well considering it is going to be my first trip to the States and if anything happened to me on the way there, i'd be pretty much screwed so i just told her that i bought a ticket to spend Christmas with her. This part i'm sure you would be thinking i'm really crazy because what if before it even got to Christmas and things didn't work out between us, what am i going to do about the ticket? Yeah, i thought of that too. I would say just relying on our faith that God will see us through this relationship and also, just trying not to push things a bit too far.

Fast forward, December came and of course by then we got together. The initial idea before we decide to get together was for me to come over and spend some time with her just to see for myself if she really is the person i played out in my mind to be and for her to do the same and then only decide if we want to go on with the whatever-ship we were on. In simplicity, by December when i come and if she turned out to be a psycho woman or i happened to be too asianized for her, we will be 'breaking up'. Isn't weird how one can 'break up' without even being in a relationship too? That was why we just decided to be 'officially' together.

So here i am. 5 months coming to 6 months into being in a relationship with a girl from Traverse City, Michigan. I'm surprised at how much we just clicked the moment i arrived at the airport and right there and then, i knew it was all good. It's been a great journey so far and i'm sure there's much more to come for us. I'm thankful that God has blessed me with her in my life and also at the same time, gave me the opportunity to spend my first white Christmas with someone that i love.

This is to you, Calla. I know you've been creeping around this blog every now and then you little creeper so i hope this whole post will help explain to more people around on how things got started instead of repeating it over and over again. You'll thank me for that. Haha. I love you my Traverse City girl. 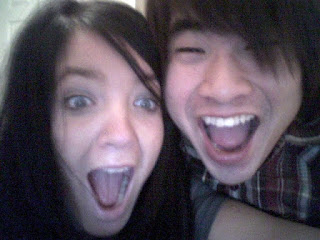 yes, my live revolves around facebook, wayy too much.
8:21 PM