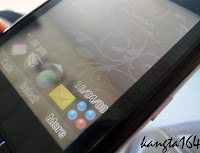 How does it feel to turn 22? Super grateful. I don't know about you guys but it seems to me like this world is getting more crazier. Each day i read the news over here, there's always dozen reports of people losing their lives. Be it accidents, cancers, suicides, homicides, insecticides, pesticides and all the other 'cides'. It's just scary. I've also been trying to catch up with news back home and of course the recent buzz was about a Kiwi woman who lost her life in a hit and run accident back home while she was cycling.The news eventually made it here. However, according to the local report here, it's stated that the Brunei police already found the driver of the car who hit the cyclist but i can't seem to find any local report back home to confirm that. Hmm. If it is true that the authorities did find the driver of the car but no press report was release, i would think that it's all shushed by that 1 question..."Ko kenal aku siapa ka?"

Anyway, my birthday this year was rather quiet. Well, considering it's only my second month in here, someone was nice enough to give me a present. A beetroot to be precise for my 22nd birthday. Definitely the first and hoping it's going to be the last? :P

Then there's all the wishes from you guys back home. Thank you. :)

Oh another thing i realized is that a lot of people have been telling me it's been a bit quieter ever since i left. It kinda makes me wonder....