October 24, 2013
Brunei is making headlines around the world again. And no, this time it's not about another grand royal wedding. Yesterday, the Sultan of Brunei officially approves the introduction of Sharia law in the country. This is definitely creating a buzz within the people country and also for the foreign media around the world. Not surprisingly, coverage from the overseas media is focusing its report more on the angle about us being possibly stoned to death or amputated. 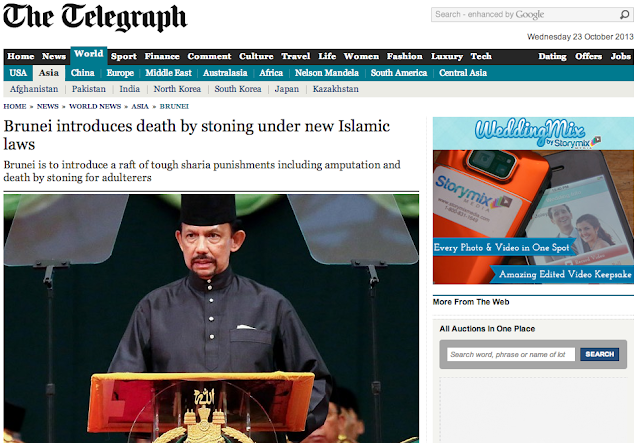 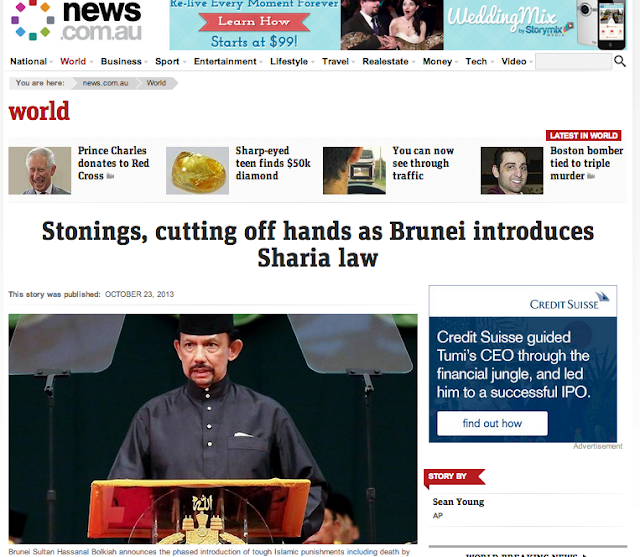 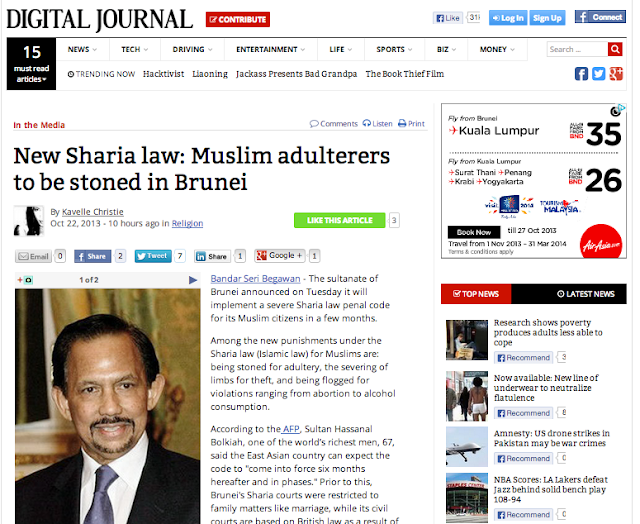 Personally, I think the introduction of Sharia law into the country is unavoidable. Firstly, Brunei thrives itself on being known as an Islamic country. Plus, the Sultan himself is a devout Muslim so it is not a huge surprise that the Sharia law will eventually be introduced and passed in the Sultanate. And having read the recent inaugural lecture transcript by the State Mufti also gave a logical explanation why such law has to be implemented in the country. One of the point, which is also the main theme of the lecture, was that the Sharia law ensures justice and security for everyone. With the introduction of the Sharia law, it aims to put fear in those who plan to commit crimes by reminding them that the consequences of it is painful death. Many would agree that such method is barbaric and inhumane. And it is. But because it is that barbaric and inhumane, it forces a person to think twice before they commit the crime.

The media over the years have portrayed the Sharia law and the Islam religion in a negative form especially since post-9/11. And of course when people outside of Brunei hear that the country is introducing Sharia laws, they start stereotyping us as one of those "terrorist country". And thus, it makes the country looks like it's going backwards. But what's the point of being an Islamic country if there are no Islamic laws? Brunei has been a peaceful Islamic country since the 16th century so I don't think there will be much changes once the Sharia law takes place. If any, we may possibly see a decline in crimes and rape/theft cases? There is still six months to go before the Sharia penal code and justice system goes live, I hope that the country's citizens and residents will be properly informed on what the law consists of and the severity of the crimes committed - especially for those who are not familiar with the teachings of Islam. From a non-biased point of view, I am hoping that out of this whole spotlight we're in at the moment, Brunei can show the world the beauty of Islam and hopefully be an ambassador among other Islamic countries.

So with the Sharia law now six months away, is it good news or bad? I say it's neither. Brunei has been an Islamic country and will still be one for centuries to come, so either way the Sharia law will still be implemented eventually as that is part of the religion's teaching. Does that mean it's not safe to visit the country because the Sharia law makes it so much "stricter"? I'd say it's probably safer for you to come visit us than for us to visit your country. The State Mufti also highlighted a good point saying only those who have plans to commit a crime will fear the law. So why dwell so much on figuring out what's going to happen once the Sharia law takes effect when instead, I think we should all focus more on how to improve the country's infrastructure. For starter, the terrible internet connection! E-speed still sucks big time and we're living in 2013!

Anonymous said…
Hahaha you make me laugh 》 devout muslim.? duh everyone can smell what he did back then..collecting sluts and fucking around back in 1980. but now still that old maniac
5:57 PM