June 20, 2011
I'm not really a tech person when it comes to computers but when it has something to do with money, the super asian side of me will try and find a way to minimize any unnecessary costs. I've been using this current MacBook Pro for about a year now and not long after i purchased this model (2.66ghz Intel Core 2 Duo) about a year ago, Apple announced the release of their MacBook Pros with the new Intel i5/i7 chips in it. If you're an Apple user, you'd probably have the same bittersweet relationship with their products just like me. Just when you thought you've got the latest and fastest product, lo and behold, Steve Jobs will suddenly announce the release of a better and faster product than what you've already have.

Ever since the release of the new models, I've been eyeing to upgrade my 2.66gHz MacBook Pro to one of the models with the i5/i7 chip in it simply because I (insert whatever reasons i can think of). But thankfully, the sensible side of me knew that i couldn't afford to do so. And then i thought to myself, well if i can't get the latest and fastest model, maybe i'll feel better if i can upgrade the specs of my MacBook Pro. So i went on Apple's website and looked at the costs of upgrading my ram.

Like i said, i'm not really a tech person but really, $640 for two pieces of ram? That's worse than daylight robbery. I was thinking if i am going to pay $640 for it, it'd better be some super magical Apple branded ram. Me being me, i love doing a lot of research before making a purchase so i went online to see if there's any other cheaper options for ram upgrades. After reading a few forums, i was surprise to know  that Apple does not produce their own ram. In fact, most Apple computers/laptop use a third party brand for some of their components. If you own a MacBook Pro, chances are you either got a Samsung/Hynix/Micron ram running inside. I also happen to stumble upon Macrumor's website guides to buying Mac ram which was really informative.

So, after reading around i managed to narrow down to buying my ram from Macimprove.com simply because they ship overseas and they sell the similar ram brands that Apple uses. Most people would opt for a slightly cheaper ram brands such as OWC and Crucial which are well known for compatibility but i decided not to take the risk simply because i'm paranoid it might void my Apple Care warranty in case something happen. I spent around USD $120 (NZD $150) for a set of Samsung 8gb ram including "standard" shipping but little did i know the "standard" shipping took only 4 days which was an unexpected pleasant surprise!

But how did i actually change my rams on my MacBook Pro? After watching this tutorial video, i found out that it was really simple.


The only problem i faced was not having the proper screwdriver to use so i had to make a little hunt around the city. The perfect screwdriver needed to open up a MacBook Pro would be a "Philips Head #00 screwdriver" and i would really suggest getting the ones that comes with a rubber grip. There were a few people mentioning that it was hard to get their screws off but for mine, it didn't take much effort at all. It took me approximately 10 minutes to get mine done and after that... 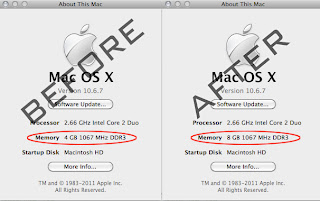 Ba-da-bing...i save me $500! If you guys do plan to upgrade your ram by yourself, make sure you buy the correct ram specifications for your MacBook Pro model. Most of the websites selling ram on Macrumor's buying guide page have listed the specific type of ram that suits your MacBook Pro so it shouldn't be too hard as long as you know which model you have.
tech

BJA said…
Thanks for posting this. I never tried of upgrading my Macs ram in fear of breaking it. Now I think I can give it a shot. Thanks a lot.