October 18, 2010
As sad as this may sound, Adam Lambert's concert was officially my first concert that i attended since coming to New Zealand. I've been here for about a year and a half already and so far, there had quite a number of big names that have performed but i never really bothered...mostly because it wasn't my favourite genre of music. 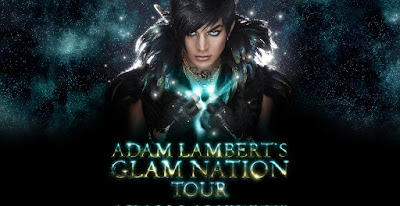 I've always admired Adam Lambert for his vocals ability ever since he auditioned for American Idol back in 2009. Especially during these days where auto-tune is so overly used in the mainstream music, you really need to applaud this guy for his natural talent. After the finale of American Idol, despite losing to Kris Allen, i knew that was all the publicity he needed to get a record deal in order to release an album and sure enough, his first debut album "For Your Entertainment" was released six months later. But of course, that was also followed with his whole sexuality bit which got things stirred up while he was competing for Idol. Regardless, gay or not, i just admire this guy for his talent and after experiencing his first live concert, my admiration and respect for his work and talent has definitely increased. His first album wasn't exactly what i was expecting as i personally find a lot of electro-effects going on so it was a bit of a letdown for me. Nevertheless, his extensive range of vocals still showed that he hasn't slowed down at all after completing Idol. The only thing i regretted prior to attending his concert was the lack of familiarity with his songs other than the ones that was being overplayed on the radio everywhere. 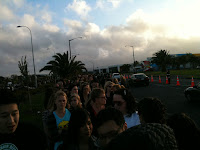 So, on to the concert bit. My friends and I arrived at Trusts Stadium approximately 30 minutes before they open the gates and this was what we saw. Yeap, since my last international concert experience was almost 9 years ago back in Brunei,  (A1's A-List Tour to be precise) i would be lying if i say i wasn't shocked. After queuing for probably 30 to 40 minutes or so, we finally made our way in to the stadium. I should have brought my camera with me because while standing in line, i felt like there was a free fashion show entertaining me to kill time. The 'glambert' fans as they would call themselves seriously went all out to dress up as though as they were going to be the ones performing that night. And of course, i'm sure during that week of the concert the sales of eye liners and mascaras around Auckland must have had a really good week. Too bad there wasn't any special ones endorsed by Lambert himself cause it would have probably sold out.

I thought the stadium was quite simple and small. I was expecting it to be stuffy, packed and all gross with sweaty people rubbing themselves near you while jumping up and down but it wasn't that bad. That's cause we chose to sit instead of be part of the excited young crowd that was in front of the stage. :P I think my days of being a fanboy is over. We weren't sure if there was any opening act so most of us assumed it's gonna go straight into Adam Lambert's performance but when the lights went out and the drums started playing, a smooth voice started singing and entertaining the crowd. We only found out later that the opening act was performed by local star, Seth Haapu who was also a former contestant in Australian Idol. His style of music is rather unique and most of his songs have quite a catchy beat and rhythm to it as well. I thought he did really well despite the crowd's anticipation to see Adam Lambert.

After Seth Haapu's performance, we were expecting to see Mr Glamorous when his picture appeared in the background. Unfortunately, there was some delay so the crowd on the dance floor had their own little fun jumping and singing along to other popular songs being played while the seated crowd did a few Mexican waves. Finally at about 9.30 pm, the lights went out for the second time and Adam Lambert brought everyone to their feet with his opening song "Voodoo". I won't go into details about all his songs and performances but let's just say the shivers he sent down my spine when hitting the high notes for the first song was more than enough to convince me that he is that damn good. The other preparation i did before attending this concert was googling the songs he was gonna sing from his previous tours in other countries. While i got 14 out of the 17 songs right, i was really looking forward to him doing a cover of "Mad World" but instead, he treated Auckland to a cover of Metallica's classic "Enter Sandman" for his bassist Tommy Joe Ratliff's birthday.


Another highlight for me in this concert was how he toned down a few of his songs; "Whataya Want From Me", "Aftermath"& "Soaked" into acoustic sessions to show his vocal abilities. His final song for the night was his popular hit "If I Had You" where it pretty much got everyone jumping and dancing. Despite the fact that throughout his concert there were a lot of sexual connotations to his moves, i wasn't too bothered about it all. How can you? It IS Adam Lambert after all. I know there are people who do look at the lifestyle of an artist before giving in to their music but i really do suggest that if you do want to differentiate how a real artist should sing today (without much auto-tuning may i add), you must at least try one of his live performances to get it. I'm not implying that he is the best but after experiencing his live show, i can safely say that he is one of the best out there today.

Next up for me, Brooke Fraser! Woohooo!
concerts music nz

Sharon said…
Very interesting and fair review of GNT and Adam Lambert. He is better live isn't he? Btw I think Adam is the best vocalist and performer in decades. I've seen them all too.
9:51 AM