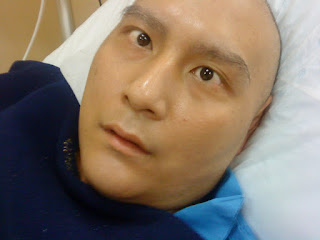 My brother's eyes "shoot bird" (hokkien; pa jiao) as he would like to describe it. So bro had to do his stem cells transplant for the third time tomorrow. Initially, we were hoping it would be a one off thing but the targeted amount of stem cells count during the first transplant was only half. Doctor was aiming at 10 million cells but there was only 5 million so bro had to do another one today. After 7 tiring hours of doing another stem cells transplant, the results showed there was 4.3 million cells so doctor suggested for a final one tomorrow just to be safe that there will be enough cells to be put back into his body when he's gonna be on chemo again. Well in all honesty, my brother's really frustrated at the whole outcome because he's really feeling tired with this stem cells procedure. Then again, it's not like he have any choice because his life pretty much depends on this whole thing. It's pretty hard to go on telling him over and over again that "It's okay..." or "You'll be fine..." because i'm not the one lying on the bed for the whole month nor am i the one lying still for 7 hours just letting blood flow in and out of my body so today i just let him vent on his frustrations and be mad about it for the night. Hopefully dim sum will cheer him up tomorrow. 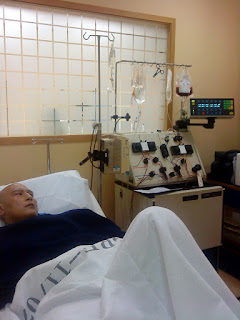 Bro undergoing his stem cells transplant. I'm a bit fascinated how the human blood can still be separated by this machine... 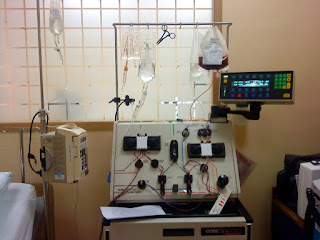 The machine that does all the work...
I'm fully aware that there's a lot of people reading my blog lately just trying to catch the latest update of what's going on with my brother so i'm doing my best to let you guys know what's going on. My brother's been encouraged to receive all the love and support from friends all over the place especially from those whom he haven't heard from in years. Do continue to keep in him prayer. If it is not too much to ask, do keep my mom in your prayers too. Being with her for the past few weeks, just accompanying her in and out of the hospital daily just made me understood the true meaning of 'a mother's love and sacrifice'. At this point, i know she is carrying a lot on her shoulders not only with my brother but also with home issues and mentally, i know she is extremely extremely tired. Only God can give her the peace and comfort that she needs.

Just for laughs, i'll leave you with this. Check out the 'latest' television set that the ward is using in the hospital where my brother's at. 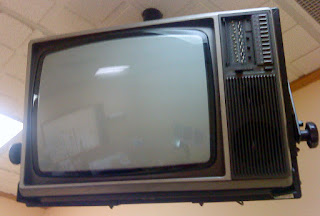 Their very own 'plasma' tv...
Not all parts of Singapore is equipped with the latest technology yet. I'm not sure if there's color on this one either cause it looks too fragile to be switched on. I forgot to take a picture of the remote but it looked something like this...

The nurse asked me to pass this remote control to her just now to switch on the other tv in the other room...
bro pictures