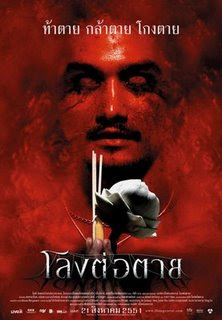 Synopsis of the movie...

"Inspired by a true Thai ritual of lying in coffins to cheat death and get rid of bad luck, The Coffin is a spine-chilling supernatural thriller about a man and a woman who are confronted by a series of paranormal and terrifying incidents after going through the bizarre ritual. Thrilling, mysterious and ultimately moving, this new film from the award-winning director of Beautiful Boxer is also about the beauty of life and death, living and dying. Starring Karen Mok (So Close), Ananda Everingham (Shutter), Andrew Lin (The Heavenly Kings) and Napakapa Nakpasit (Art of Devil 2)."

Save your money! Go watch Highschool Musical 3 (not that i've watched any of it yet...don't think i will but i still think the money would be more worth spending on that show as to this) or something else that's showing in the cinema. Probably it's exciting for Thais to see Karen Mok's appearance in their local cinema screens but to compare this show with other Thai horror movies that i've watched, this one is really really bad. No really, it's so bad that even when the movie Shutter saw this flick, it went "Oh SHOOT!" *lame alert!*

Haha. But really, there's not many scary scenes in this movie that'll make you cringe in your seat, most of the 'scary' part are pretty much predictable and the storyline is just all over the place. The only thing that you'll probably find interesting or at least which i did was the part of the whole ancient Thai ritual thingy-ma-jiggy coffin part. That's about it.

I could've saved the 1 hour 45 minutes watching The Biggest Loser which i'm really hooked on to right now.

The Coffin. 2 thumbs down and not even worth investing in a DVD for me! :(