On Tuesday, my family and I stopped by the Berakas Christian cemetery to pay my dad a visit on the anniversary of his death. 13th February 2017 marks his 11th year after losing his battle with pancreatic cancer. I am dreading the day when I hit the age where I've lived longer without a dad than I have with one. But such is the reality of life as I would tell myself. The more I think about it, it's not death that I fear but more of his existence that will soon be forgotten. Gradually, there will come a point in time where people will just look at the tomb and wondered who Andrew Cheng is. And that sucks. While on the topic of death, I happened to see a quote somewhere that also changed my perspective of it.

"We are all dying the minute we were born."

While doing a bit of wiping down on dad's tomb, we were greeted by a furry stranger that seemed lost and tired. She gave each of us a little sniff and sat under the bush next to dad's tomb. 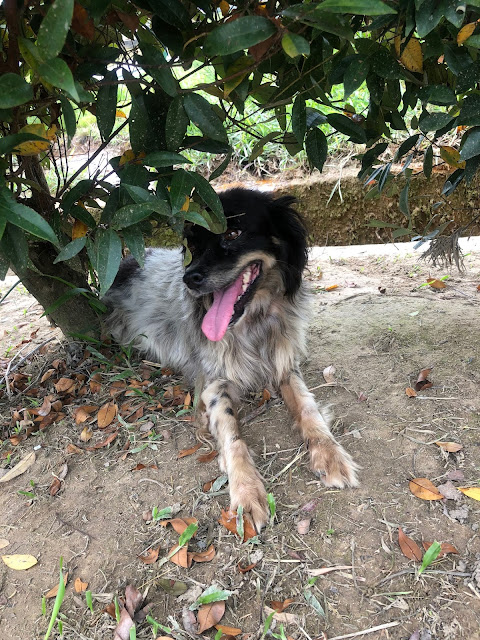 We initially thought she could be from a house nearby or possibly one of the dogs from the caretakers of the cemetery (though we're not really sure if there is anyone living at the cemetery...no pun intended) but at first glance, she looked exhausted and hungry. As soon as we were done and were about to leave, she started walking with us to the car and that's when we thought maybe she's someone's pet and had gotten lost. Her tongue and teeth looked rather healthy but she was walking with a slight limp. It wasn't really an injured limp but more like she's been walking for ages and her paws are sensitive.

I went into damage control mode and decided to take some pictures and videos to post online hoping that it was someone's pet who went missing. Given her calm and friendliness, she didn't look like a stray to me. After hanging out for a bit, we decided it was probably best to leave her and hoped that someone will claim her from the cemetery but as soon as we got in to the car, she cried a little and that instantly crushed all of our hearts. So we decided to take her home with us to give her a little TLC while hoping for the owner to claim her back. And if that doesn't work out, we were ready to add her to our additional four dogs at home.

Now all this sounded really feasible in theory except when put in practice, things got a little chaotic when you have four extremely territorial dogs at home. As soon as we got her home, both Buddy and Coco started growling and barking but after a few minutes of sniffing, Buddy didn't bothered her at all but Coco on the other hand could not handle having another female dog. After a few hours, they've re-established their own 'space' with this new dog claiming the front door to be hers. Of course Coco got a little annoyed as that's her spot but I was rather impressed with both Buddy and Coco for allowing her the space that she needs. But the other two puppies definitely had to be locked away cause each time they catch a glimpse of her, they go ballistic.

After giving her a fresh shower and feeding her, we could tell she must have been lost for a long time. Her paws were all chipped off (presumably from a very long walk) and she was exhausted. Slept for most of the time and ate to her heart's content. It was definitely hard trying not to get too attached to her. While I told myself to refrain from giving her names as we weren't sure if she was someone else's pet, my mom on the other hand started calling her 'Christian'. Just because she was rescued from a Christian cemetery. I mean really mom, thank God she wasn't found in the drain otherwise she might've been named 'Longkang'.

The next day she seemed much more relaxed with her new environment though she still looked extremely fragile. And then I got notified on Facebook that someone is keen to adopt her. Immediately, all of us were relieved but I could tell both my mom and sister did seem hesitant with letting her go so soon. But the fact remained that we already have four dogs and so far, only two out of the four were barely okay with her. So we just kept telling ourselves, it's the right thing to do.

Since all these were tentative, we were also prepared in case the new family changed their minds but much to our delight, they came to pick her up today. It turned out to be a beautiful story indeed. Apparently, someone in the family attended a funeral on Monday, just the day before we took her home with us, and saw Christian. After deliberating, they decided they wanted to go back the next day to rescue her if she was still wandering around. But that night itself, one of the family talked to her cousin, who happened to be my friend, about their plans to rescue this dog from the cemetery. That was when I got the notification via Facebook. And while chatting with the family, they told me that the current dog they have right now was also rescued from the same cemetery about five years ago and they felt this one would be another perfect addition. Also the girl that got in touch with me says she's rarely on Facebook and when she went on, her cousin tagged her in my post. If that's not enough, midway through our conversation, my mom just got home and it turns out that the dad of the family is an old friend of mom's.

Despite having her for only two days, she could easily be a keeper but given our circumstances, we all felt she would be better off with this family. Plus, the random connection and story behind all this just made it even more beautiful for 'Christian' to go with this family cause I personally felt like it she was meant to be for this family. May you recover and live the rest of your doggy days to be a happy and healthy dog!

Since we are celebrating the year of the dog this Lunar New Year, here's wishing everyone a blessed and prosperous Chinese New Year! Huat ah!!!
animals dogs pets rescue