October 02, 2016
If you've been following my blog since the beginning, you would've known by now how much I hate TelBru's shitty internet service. Even before it was corporatised to TelBru, I hated it. When they announced they were being corporatised from JTB to TelBru, I thought things may be for the better but nope, majority of the country's population is still being ripped off with their ridiculous pricing. But what else can we do besides having to move on with a 'just deal with it' attitude since they are the only internet service provider nationwide?

I do however give them credit for trying to up the country's internet infrastructure every now and then but the main problem I have with them is the lack of transparency with how they deal with their existing customers. Lately many of the country's internet users have been experiencing sudden internet cut off at midnight with no advance notice given and no explanation provided after. Many vented their frustration online while the rest just suffer in silence.

For me, I find it unethical for them to continue billing customers when most of the time, they don't live up to their promises with their shitty service and their hidden charges. For example, before my area was upgraded to their FTTH network (Fibre To The Home), I decided to upgrade my e-Speed plan to their 5mbps only because they updated their pricing. But after a few months on it, I noticed the speed of my internet connection gradually started slowing down. Only after filing a complain and some investigation, I was told by their technician that my area "does not support the 5mbps speed" which was probably a lie because the first few months worked fine. But since they recommended to downgrade my plan, I went with their suggestion - only to find out that there's a $50 downgrade charge. I tried arguing with them I shouldn't be charged because prior to upgrading it, they told me that my area does support the speed. And now they're telling me it doesn't. But do they care? Nope.

Now with their FTTH service, I can finally be on a higher speed. Seeing that I've been paying $98 for the last 15 years or so, I figured it would only make sense to stay within the same expense monthly. So I signed up to their $99 plan thinking it's only $1 less than my budget of spending $100 a month for internet. However, much to my disappointment when my first bill came, I found out there's a $13 additional charge for 'telephone rental' which is ridiculous because we don't even have a phone connected to it. But obviously, there's no point to argue with them because there's no alternative internet service provider to choose from. Hence, they don't care.

But back to their latest stint of cutting people's internet off without warning and slowing down of speed. Many tried looking up on their website to see if there's any announcement of maintenance work being done but couldn't find any. Neither were there any updates on their Instagram account about their shitty connection but instead, they had the time to post a 'bahasakitani' (our language).

My first thought to seeing that post was...really? Did I really want to know what 'tangkumus' mean? I came to your page seeking answers for my shitty internet speed but here you are teaching me on a Brunei word that I probably won't even use in my life. Shouldn't they be fixing their shit instead? And that pretty much led me to comment on their post... 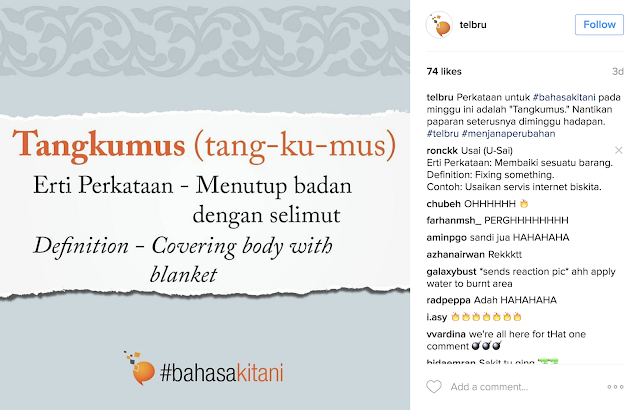 Much to my surprise, many people found that comment hilarious and was circulating it around on Whatsapp and Twitter too. I thought TelBru would probably delete the comment eventually but they don't seemed too bothered by it. 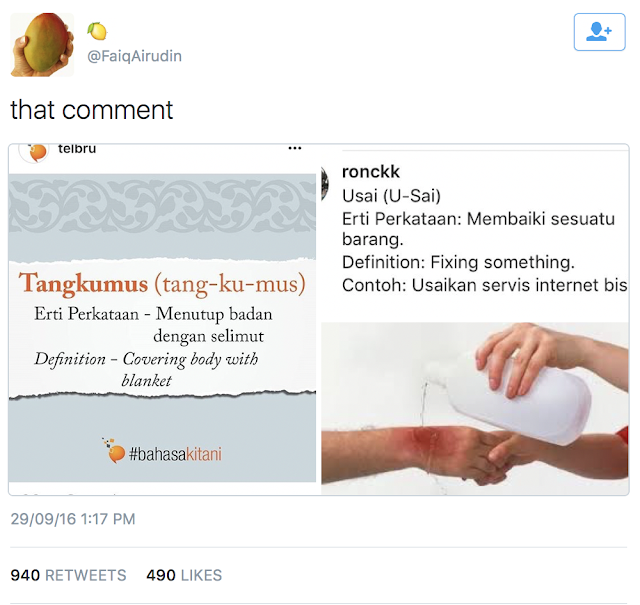 In fact, they even reached out to me via DM asking me if everything is ok with my internet connection, which I thought is a nice gesture considering the unexpected burn comment. 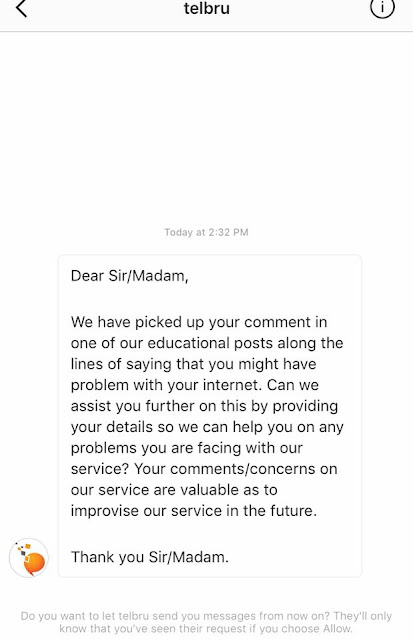 But what is the point to even address this when I am sure they know something is wrong with their service. In fact, I would even appreciate it if they'll just DM and tell me the reason why the internet is being a little shit. But no, they would rather pretend like all is well and ask me what is wrong! So, instead of wasting my time typing up my complaints, all I did was reply with a screenshot of my problem. 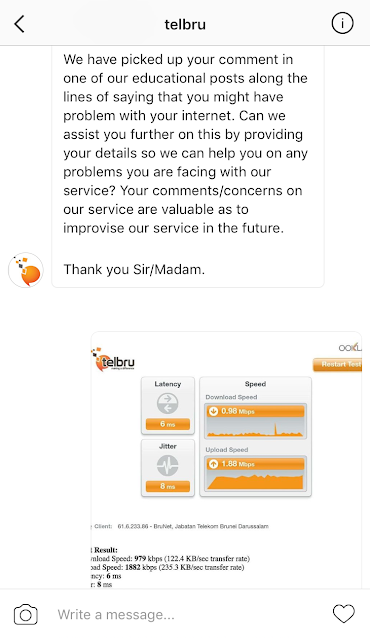 Of course they didn't respond to that after. Cause TelBru doesn't care.
brunei