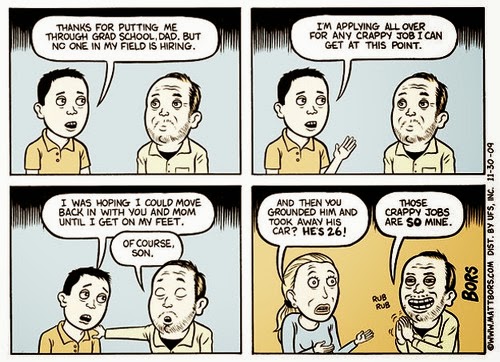 It's been officially 4 months and 6 days of unemployment. Now this part of making my big move back to the motherland was definitely unexpected. And for each day that passes by, it is starting to get depressing. And truthfully, I am already running out of optimism and praise for my own country.

That's the burning question that constantly floats through my mind every night before I sleep. My last trip back to Brunei in June 2013, I was actually filled with excitement when I decided it was time to move back here. I've seen friends who once studied and worked in Australia / UK / NZ doing relatively well with their careers locally. People I talked to then, said convinced me that despite loving the lifestyle overseas, it's still easier to save up when you're back here. And that was what I was after. I needed to save money for my wedding. And I needed to do it fast.

This. I hate this quote more than ever. I fooled myself into believing that getting a job would be as easy as finding a bubble tea store in this country. But the whole "yellow-IC-can-get-you-a-job-anywhere-in-Brunei" is a mentality that's definitely stuck in the 90's just like everything else in this country. Yes, there were plenty of opportunities back then as the country was booming. But not anymore. And then ironically, only a few weeks after moving back to Brunei, I found out that I was just a number. I'm one out of the 18,000 unemployed locals. But wait, didn't I just read a few months ago, my country was bombarding runaway scholars about not returning to contribute to the country's development?


Well, fuck me. And there I was, thinking to myself that I was doing my country a favour. A self-funded degree scholar returning back to his motherland to "contribute back to the nation's development." If they had publish the report about 18,000 locals being unemployed BEFORE the whole runaway scholars shenanigans, I would've had a different game plan.

In all truthfulness, the earlier part of my move back here was filled with pride - both good pride and bad pride I'd say. We're told to be proud of who we are and where we come from. Overseas, I was telling friends about how good life is back in Brunei. I was proud being a Bruneian especially after being away from home for almost 5 years, you certainly do miss the little things about this country. Plus, I was proud to show off what Brunei has to offer to Calla hence, the excitement for starting another adventure with her here. And then there was a different pride where I put on my "Fuck yeah, I'm a yellow IC kali-ah, welcome me with open arms Brunei and give me a job" hat. 4 months later, that clearly didn't turn out well. Over the course, I've sent out about 20 - 30 CVs (including job fairs) and has been interviewed four times so far with 1 rejection. The results of other four interviews are still pending but presumably unsuccessful. And tomorrow, I've got another interview lined up which makes it my third interview with the same company. Yes, the same Human Resource coordinator will be seeing my face for the third time tomorrow.

"Are there really no jobs available in Brunei?"

Having collected 4 months' worth of Weekend Borneo Bulletin and Brunei Times, there will always be a job listing every weekend. So I wouldn't say that there are no jobs available out there. Except that I wouldn't know what's required of me as a Quality Welding Supervisor or a Total Productive Maintenance Coordinator. In some way, I am being a little picky with what my career choice but only to a certain level. If I think I can handle what's listed on the job description, then I will apply for the role. I've been down that road where I've worked in an industry that I have no knowledge of and it really sucks. It gets really really depressing coming back home after a full day's work and not knowing what exactly you have accomplished. Which is why I absolutely hate it when people tell me;

"Just apply for whatever's out there, who knows you might get the job? If you don't like it, quit lah and look for another one."

Having spent almost three years working in an irrelevant industry has taught me that yes, you can bullshit your way every month to getting your pay check. But I believe people with work ethics and conscience would know themselves whether or not that monthly pay check is really their reward for their month long of hard work. I've tried hard for the first two years to learn what I could but by the third year, I admit defeat. So I resigned. I can't stand being depressed each time I wake up to go to work. I feel guilty getting my pay check every month knowing I didn't perform to my capabilities. I knew I could do better but I didn't know how - which made me extremely frustrated because there was clearly a lack of progress both in my personal and career life. I felt I had ultimately betrayed my employer who has looked after me. But if it is for a legitimate reason, your employer will be more than happy to let you go - especially if it's for a brighter future. Which is why I decided to leave in 2009 to pursue a degree. I left my part time job at Rockport in 2011 to pursue a full time career. And I left Madant and New Zealand in 2012 because I thought moving back to Brunei was the right move for a brighter future.