September 20, 2012
In case you've been living in a cave for the last month or so, here's the latest viral music video that came out of South Korea.


And much to everyone's surprise, not only it has gone viral within South Korea but it went viral - WORLDWIDE! The song is so catchy to the point that everyone wants to do their own Gangnam Style remake in their hometown. There's KL Style, Chicago Style, Singapore Style, Indonesia Style, Sabah Style and even Gandalf wants to have a piece of the Kpop fever.

Perhaps what took me by surprise was Brunei style!


I know most Bruneians tend to shy away from the camera. It's not surprising seeing that it is a small country after all and majority of the audience are quite harsh 'critics'. Plus, knowing there is a high probability that someone you know might see you making a fool of yourself normally makes you think twice about being in front of the camera. But seeing that it's Gangnam Style fever everywhere, I think this video was well received by most of the audiences in Brunei.

Anyway, since the release PSY's Gangnam Style music video, I've also been getting a few tags and comments on Facebook saying that the guy who dances in the elevator looks a lot like me.


My initial response was no, I don't think I look like him although I did dance like that on a few occasions. But after a few more comments, I decided to have a play with photoshop. 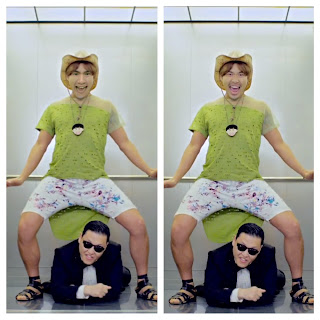 I think I found my long lost brother.

Unknown said…
this was one of the funniest music video ever..aside for this i bet one can find this cool v.
10:38 PM