March 14, 2012
It's been 18 days since i got back here. So far, I've applied for most, if not all of the production/television related roles I've found online. Rejection emails i have received so far - two. The optimist side of me tells me that it's still okay because I have yet to hear from the other applications I have submitted while the pessimist side of me is telling me I should've changed my last name from Cheng to a European sounding name for some of my job applications.

I can understand why employers might brush off applicants with Asian sounding names cause truthfully, there are quite a number of Asians here who still sound fresh off the boat with their English. But then again, being fresh out of uni after two years of writing academic essays that makes me sound like a sir, shouldn't they at least consider us? 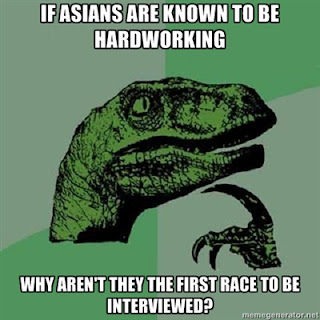 I know I'm still at the early stage of my job hunt seeing that most of my friends who have been living here for a long time took at least a few months before they got themselves a job but i gotta admit - it is a little depressing seeing some of your classmates who graduated with you already scoring themselves a full time job in the industry. But i guess that's life.

Anyway, besides being a jobless graduate, life is still treating me well here. And for the record, no I don't intend to ditch my family name - in case you were wondering. If Jeremy Lin can make it to the NBA, i'm sure Ronald Cheng can make it somewhere...

Keep your head and march on!

A wise man told me this phrase from the Bible when I was going through the same patch, Jeremiah 29, 11 - 13.

Unknown said…
Well, I think everyone has these thoughts every once in a while. Just because you still don’t have a work doesn’t mean you’re not good at all. Maybe you have yet to find the right job for you. Sometimes, we have to get a bit lost before we could get to our destination. Anyway, good luck!

Unknown said…
It's good that you kept being optimistic despite all that. It can be tough at times, but that's just part of the job-hunting process. One has to be patient to land on the job that they always wanted. So, how are things doing now?