May 03, 2010
Anyone here ever come across the saying "You'll never know what you have till you lose it"? It may come in form of relationships, families, friends, things and for me right now, food. The one thing that i tend to find myself doing is spending money food i can get back home for half the price of which i'm spending here. I'm not talking about the usual nasi lemak or fried kueh teow food but it's more of the little stuffs that you don't realise you miss till you actually see it.

The last time, i spent $3 on a pack of biscuits which i can probably get it for a few cents back home. What biscuits you ask? The biscuits that will definitely get you addicted when you start munching on just one. 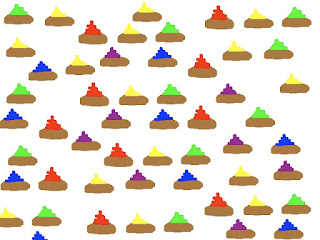 Ok since i can't find the pictures online, i might as well just draw them. I'm sure those who used to have them when they were kids would know which biscuits i'm talking about. Jewel biscuits or something like that. Noobs would probably think i drew some colourful craps but no, those are Asian pride biscuits! Some of you guys might think "Dude, it's just $2...no biggie!" but i tell you...$2 back home can buy you probably half a plastic bag filled with colourful crunchy craps! Anyway, don't worry i didn't spend my whole month of allowance on that cause i have good self control. I have this principle whereby i will try not to spend on food which i can get back home unless i really really am craving hard for it. So getting a pack of this jewel biscuits was worth it for me.

And then, few days ago while having a meal at a food court with a bunch of friends, i decided to order some Indonesian meal. Right on the counter, they were selling their local cakes. And then for some reason, i decided to buy this pack of cake (actually for Bruneians it's kueh) for NZD $3.90. It came in a pack of 3. Just as i took a bite out of it, it made me realise another thing... 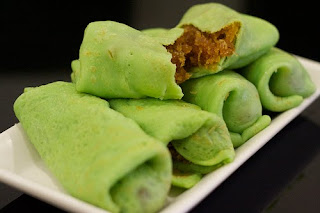 Only my mom would eat these type of cake. I have never ever liked them since young and hardly have them just cause there's coconut in them. Then again, this time around, i quite enjoyed it.

Two days ago, i did a bit of grocery shopping at an asian supermarket nearby my house and walk past the snack section where they sell some of the stuffs i used to enjoy back home. This time, it's not biscuits or kuehs but it's "Hawflakes". Ok, maybe they were never called Hawflakes before but probably because they had to export this to New Zealand, they decided to randomly put some fancy name on this products. Come to think about it, i also don't quite know what i used to call this back home. Plum rings? Plum bites?

This time around, instead of gobbling down each stack like how i used to back home, i took some time envying the packaging, finding out it's nutritional value and just take notice of minor details which i used to overlook before. The one thing that stood out, other than the weird name "Hawflakes" was the chop on the top right hand of the packaging. A very familiar chop that is pretty much all over most products back home. This chop. 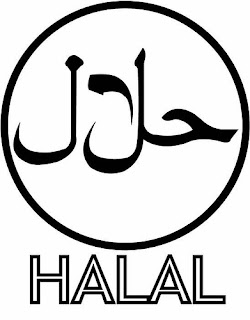 Except this time, it's a bit remixed on the "Hawflakes". 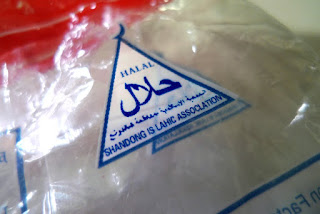 It's certified halal by the Shandong Is Lahic Assoclation.
food nz