February 13, 2010
Since my last post about Wellesley Student Apartment managed to gather quite a number of hits from random searches, i figured this time around instead of letting people know how the room is like, i should really write about my experience of staying with the student apartment.

Staying in the student apartment for the first time did kick off to a good start for me. Looking back at how i spent my 6 months there, i wouldn't say it was all a sour experience. Then again, it wasn't all sweet either. Seeing as one of my resolution for this year is to try and be positive as i can, i shall write about what i genuinely enjoy staying in the student apartment.

1. Being able to stay 3 minutes away from campus. This definitely has to top my list especially if you're not a morning person like me. If you have class at 8am, you can probably still make it on time if you get out of bed by 7.45.

2. Getting to know different people or making new friends. This is only a plus if you're one of those people who can talk to any Tom, Dick or Harry that's hanging around the apartment. If you're 50% shy, then you might wanna reconsider cancelling your "Try not to Facebook excessively" resolution for the year.

3. Relatively 'decent' for a price in the area. When i applied there, the exchange rate for my local currency against NZD was pretty good so it was relatively decent for me to stay there. But now, with the rent i'm paying, there are more options out there that includes more expenses.

And those are pretty much the only pros i've got about staying with Wellesley Student Apartment. Now for the juicy part. The CONS! *muahahaha*

1. Annoying fire alarm. Having to stay with few hundred of students from different culture can be quite fun but if you think about the number of inexperience students who acquire the basic understanding of how to bloody cook, you might think it's not that fun anymore especially when there's a gazillion number of fire alarms in the apartment. 6 months being there, i think there was more than 8 times where the alarm was set off. Major one was my first few weeks there where fire engines literally came just to find out that someone's threw a shoe at the water spray that triggered both the spray and the alarm. Other than that, it was all pretty much caused by students that lack the education of Hell's Kitchen. Seriously, the number of times that the alarm got tripped was so frequent that i even had time to come up with a video while the alarm was still on!

2. Flatmates. Crappy ones. I was lucky enough to stay with 1 Sri Lankan kid who was decent enough to respect privacy and had the understanding of what basic hygiene is. The last bunch of flat-mates that i stayed with for a really short period of time were so disgusting that it literally made one of my Indian flatmate moved out!

3. Noise. Every weekend. If you're not a party person and you happen to stay in this student apartments, do expect to hear loud noises most weekends and sometimes, weekdays. When i say noise, it consist not only of loud music but noise of many different type of banging.

4. Washing machine issues. You might think paying $3 per wash and $3 per dry for your laundry every week is not too bad but you can definitely save a week's worth of meal every month for laundry if you move in to a place that comes with those. Mine started off with $2 for each wash and dry until they replaced the old machines with new and raised the price at the apartment. And then of course, there's always problems with the coin dispensers where if you don't have your own spare change, you might have to delay your washing. Let's not forget the queue of waiting to use the machines and the extra costs of drying the laundry if the dryer does not work properly. I once dried my laundry 3 times on different dryers and my clothes were still quite damp.

5. Five people in one unit is too much. Especially if you don't have space to put your groceries and if you want your privacy respected. There are some people that have no courtesy at all that will go to the extend of using your plates and cutleries and not even wash them. My last flatmate ate my food, used my other flatmate's stuffs and does not clean up the place at all.

6. Horrible management. This is the main reason that made me write a post on Wellesley Student Apartment. Although i only stayed there for merely 6 months, i paid my rental for the year and over summer to secure a room. Considering that i've been a tenant for the past year, i would think the management would have more of an advantage to secure the room they currently occupy for the the new semester but no, they kick you out. In fact, they are so desperate to kick you out that i had to literally get my friends to help me move my stuffs out while i'm still gone. And worst of all, i was not given any notice nor did they email me about this at all.

Here's how everything happened. I had to leave the apartment immediately due to my brother's relapse last year. Considering that my rent was paid for the year, i assumed i would not have any problems with having my room till end of the year. By the end of the year i was still stuck with my family problems that i had to extend my contract via email which did not happened at all. But luckily, there are a lot of empty rooms during summer so i thought it would not be an issue to secure a room.

Summer came and i managed to extend my contract but not get my room. Instead i had to move to the other side of the apartment just cause they needed to clean the apartment for new students to move in. I paid my accommodation for the summer and went on a holiday hoping that i can just extend my current room contract for the year. Without any email notification or contact at all, i found out from my Sri Lankan flatmate that we had to move out by 10 am, 19th February. I thought since i'll be back by 23rd, they should be able to hold my room out for a few days before i come back and extend my contract or if they refuse, maybe i can get an extra week to move out. So i emailed them. 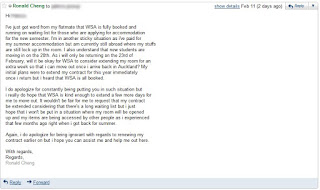 I'm not gonna lie cause i did have a bit of hope that it will all turn out alright but this is the reply i got.

Right after reading that, i started panicking. Some might think it's alright to pay $50 to have someone pack your stuffs for you but if they are professional packing company, i would totally be fine but it says "cleaners". No way am i gonna let someone pack up my stuffs that's worth more than $50 for that amount, not when they stole my udon noodles! Eventually, i managed to get hold of a few friends back in Auckland and they were nice enough to help me out so i emailed the apartment back and told them i got it sorted. Thinking my problems were solved and all i need to do is to enjoy the remaining week of my holiday, i got another reply.

I tried reasoning with them but unfortunately, some Kiwis can be quite unreasonable. In the end, i had to spend USD$85 just to mail a key and a security tag over to them. It's either i do that or lose my bond which right now i think it's NZD $300.

So that's my little drama with the student apartment. I wouldn't say new students coming in to AUT should avoid staying there but if i knew it was going to turn out this frustrating, especially with moving back and forth, i would rather find a place on my own and settle down without having to move every few months. For now, i'm just glad i'm out of that place.
AUT uni

Anonymous said…
thanx man ...seriously but 1 doubt are opposite genders allowed to stay in 1 flat or in my bedroom ...?
6:19 PM