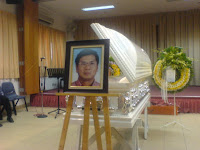 Rest In Peace Daddy
Prayers were offered. Tears were shed. Finally it's time for him to rest. For the past year, dad had been praying for God to take him away. I remembered being dumb-founded for the first time when dad asked me whether is it a sin to pray for God to just take him away. Now i know what it means when they say let God's WILL be done.


Over the past 1 year and 8 months or so, our family went through the thick and thins. Right from the start when friends knew that dad was diagnosed with pancreatic cancer, we've received overwhelming support in prayers. At the beginning, it didn't really seems to bother the family because we made this whole cancer thing looked like a little flu that might just disappear overnight. But as time goes by, dad continued to lose weight drastically. We knew things were taking a turn for the worst when one of his friends hardly recognized him. December was a hard month for all of us especially on my mom and younger sister who stayed overnight every single day in the hospital when dad got admitted. We didn't know when exactly it was his time to leave us when day by day he seems to be giving us different results. In fact until today i'm still wondering why didn't God showed me a sign that He was taking dad away on that day when half an hour ago before his death, he was telling me how stupid the world can be when a person can just take a hundred thousand dollars and make it to a million dollars but yet no one achieved that.


Yes, my dad was a professional businessman in life and unfortunately, that was also the last conversation he made before his departure to meet his creator. I'm happy that i was the one who talked to him before he died but at the same time, mad at myself for not being there when he drew his last breath. Dad's death has made me realized so many things. His suffering, his fears, his regrets, his life, every single thing about him changed my perspective of life. No doubt it's hard to lose a person you love but that's the cruel fact of how life turns. Even dad himself told everyone that he had to accept the fact he's dying. In fact, everyone will die eventually...it's just that his time came sooner than everyone. Mom told me that she's just assuming dad's heading off for a long holiday. A long holiday indeed until that one day when we shall be together again.


Again, to those who have sent their condolences, attended the funeral, SMSed and called, thank you so much from the bottom of my heart. It is only until this unfortunate event that made me realized hugging a person can bring so much peace. Rest well daddy, rest well.