What the world needs... 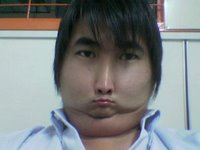 Anyway, sorry for the lack of updates. Lately there's been so much stuff going on in my head and it doesn't seem like it's gonna be good. But still, no matter how bad my life turns, i won't find any reason to do what my friend chose to do. I won't ellaborate on the whole story as i myself have no idea what's really going on but i'd just like to say, as a friend, i'm really disappointed at the decision he made..

A 20-year-old cook, allegedly suffering from mental depression, attempted to kill himself at a shopping mall in the capital recently, the second such incident reported in recent weeks.
The man, who hails from Sungai Tilong, allegedly tried to commit suicide by trying to inflict injuries with a knife.

The police, who received the distress call at around 8.42pm, said cuts and wounds were found on his left chest and hand. His clothes were also covered with bloodstains.

It is believed the man was in a state of intoxication when the police arrived at the scene. His blood has been sent for tests to determine whether he was under the influence of alcohol. It is still not clear why he tried to inflict injuries on himself and the case is still under investigation.

Life is really full of surprises isn't it? Anyway, i'm heading down to Miri tomorrow with my church for a prayer & worship event. The world today needs more prayer. No, really...think back about what have been going on, you'll definitely agree with me.

Unknown said…
hahah.. aww.. babes u know im devoted to u la kan.. haha.
thank you for the attempt tho. very terharu.
1:44 AM

juice said…
i know the burden that is placed in ur hearts. lets keep praying and we know that the world will know who they really need. we've found Him, lets bring what He's put in our hearts to them.